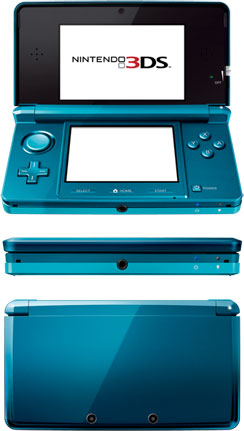 Man, I was really hoping that Nintendo would be a little more competitive with the price point on the new Nintendo 3DS. Most of us were hoping for something in the $200 range, maybe pushing $220 or $230, but that’s not where it is at all. Instead, they’ve bumped it to a whopping $300.

Nintendo made a couple of formal announcements on the matter, including images of the finalized hardware and a few other details. The biggest detail is the price (25,000 Yen). The second detail is the Japanese release date of February 26, with the European and US launches slated for the following month.  There have been some minor tweaks to the hardware, like a different color for the depth slider and a higher-quality stylus, but it’s pretty much the same as what you’ve already seen. Nintendo also said that it’ll have a Virtual Console like the Wii, except it’ll do Game Boy, Game Boy Color, and Game Boy Advance titles.

Nintendo president Satoru Iwata told industry analysts yesterday that they were originally aiming for a 2010 release. Scrambling to make enough units to ship worldwide, apparently the Nintendo elves couldn’t getting together.  So the decision was made to ship in 2011 when enough units are ready.  That’s a big loss for Nintendo as they’ve just missed the holiday season, and will be going up against some serious “tablet gaming” competition next year.

If they decided to drop the price down to $200, I’d have to seriously consider getting this – as my old DS Lite is probably due for an upgrade. At $300, I’m much less inclined. You can get an Xbox 360 or Wii for less than that.