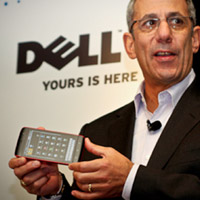 Dell isn’t just about laptops and desktops. The Axim line may not have been the most successful thing in the world, but the world’s largest computer maker is ready to give it another go with “a whole slew” of new products that aim to battle with the iPad and other tablets.

The Dell Streak 5-inch tablet is already out in the wild and they’ve got plans on raising the stakes with a new seven-inch Android tablet very soon, and an additional 10-inch tablet within the next year. But that’s not where they’re stopping. Dell Greater China President Amit Midha says they’re also planning a three-inch, four-inch, and (another?) 10-inch device in the near future.

While the iPad sticks to iOS and the new BlackBerry PlayBook uses its new OS, Dell isn’t sticking to any one particular camp. This diversified portfolio — which could include Android, Windows, and even Chrome OS — could help to boost sales for Dell… or it could just dilute the brand and confuse consumers.

For my part, I love competition. It’s not really good for anyone when there is just one major player in the game. From Samsung to RIM, Moto to Dell, they all want a piece of the iPad pie. Which slice you choose is up to you, but at least you can choose your slice.