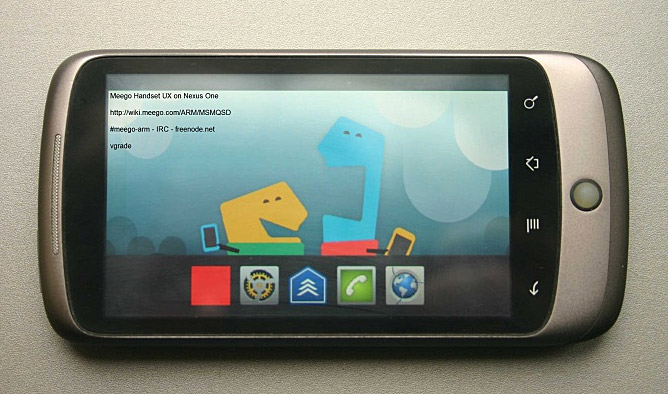 The Nexus One is the official development device for everything Android, but it has also turned into a great modding platform for other operating systems too. Like this, for instance, where developers have managed to load MeeGo onto the thing.  This is almost the reverse of the advice that I’ve been trying to give to the folks at Nokia. Their software needs some work and they should jump into the Android game. Instead, the crazy modders have put Nokia’s next-gen OS onto a phone that already runs one of the best mobile OSes out there. Go figure.

The Nexus One has been loaded with other operating systems in the past, but this is one of the most interesting cases. That’s the good news. The bad news is that the Qualcomm Snapdragon QSD8250 under the hood has closed-source 3D drivers. This kills the hardware acceleration and causes “painfully slow response times.”   I know. It’s just an exercise in what is possible. If you really want a MeeGo phone, go and buy a new Nokia. If you want some Android action, that new HTC Desire HD looks pretty damn hot.