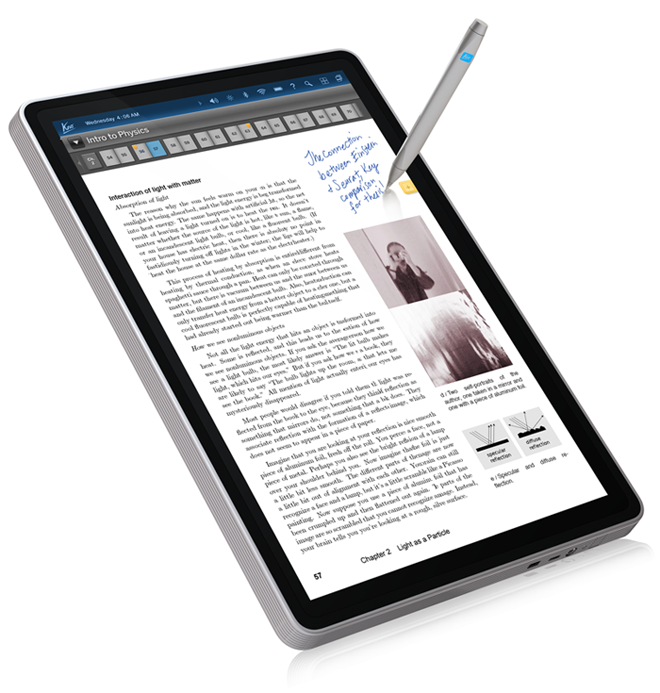 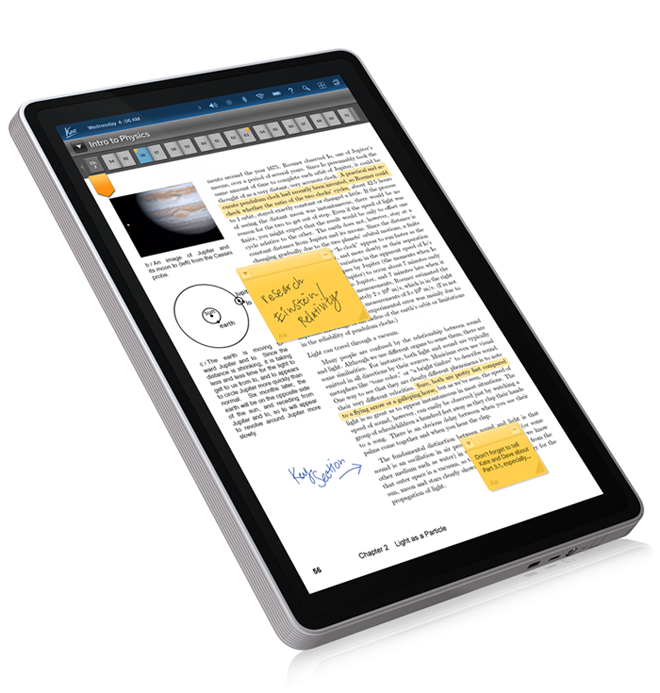 That dual 14.1-inch Kno tablet unveiled earlier this month has just been slimmed down to a single screen model. The reasoning? It will be “absolutely cheaper than the dual screen version,” according to CEO of Kno, Osman Rashid who spoke at the TechCrunch Disrupt conference earlier today.

Kno still has plans to release the sub-$1000 dual screen version, so today’s announcement is an addition to the Kno family, not a revision. Kno has McGraw Hill, Pearson and Wiley on board for textbook publishing and plans to take the electronic textbook market by storm. The device is designed to make textbook pages fit perfectly while seamlessly flipping from page to page. With their custom software to “normalize” books into PDF format, Kno should have a large database of ebooks to offer very quickly.

The company plans to have their own bookstore similar to Apple’s iBooks and Amazon’s Kindle. But the Kno is not just a reading device, with a touchscreen display students can take notes and annotate in the margins at an incredible speed thanks to the Nvidia Tegra processor. Availability has yet to be announced.

“Kno fundamentally improves the way students learn,” said Osman Rashid, the CEO and Co-Founder of Kno, Inc. “We are driven to innovate in a category that has been static for too long. Even though the Kno pays for itself in 13 months, the smaller up front investment of the single screen version will allow more students to use our learning platform.”

Kno, short for knowledge, is a transformative learning platform that blends a touch-screen tablet, digital textbooks, course materials, note-taking, web access, educational applications, digital media, sharing and more into a powerful and engaging educational experience that is not available on any other tablet or eReader today.

“From day one, we designed the Kno with flexibility in mind,” said Babur Habib, CTO and Co-Founder of Kno, Inc. “We developed the product to have multiple configurations and meet different student needs. The single screen maintains the elegance of our fluid, intuitive interface while capturing the richness and ‘page fidelity’ of the original textbook.”

The company plans to ship both the single and two-screen tablet textbooks to consumers by the end of 2010. Pricing and pre-order announcements will be made in the coming months.

Kno, Inc. is fundamentally changing the way students learn, by offering new ways to digitally, consume, organize, create and share knowledge. Kno is a transformative two-panel tablet that artfully blends the intuitive experience of the conventional textbook with a rich digital world of video, note-taking, sharing and more. Its open platform encourages publishers and developers to create and distribute innovative education applications and content. Kno, Inc., www.kno.com, was founded in May 2009 by Osman Rashid, co-founder of Chegg and Babur Habib, a consumer electronics veteran. Kno has a world class team of management from Apple, Cisco, HP, Intel, TiVo, Chegg and Palm. The company has received funding from Andreessen Horowitz, First Round Capital, Maples and Ron Conway and is based in Santa Clara, California. Follow Kno at: http://twitter.com/GoodtoKno.