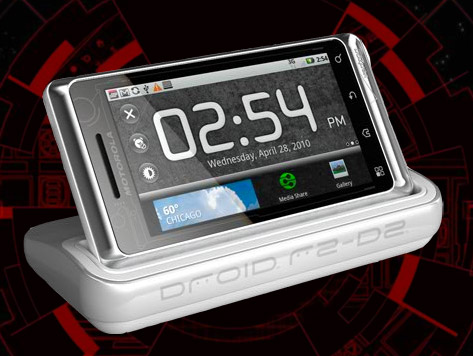 The limited edition DROID R2-D2 by Motorola has just been announced and will ship starting September 30 from Verizon Wireless. That’s this Thursday.

I realize that it’s really just a regular old Motorola DROID 2 under the hood (though that’s pretty new too), but you know how official Star Wars gear makes us.  You get the special carbonite-like box, Star Wars media dock, preloaded R2-D2 content and the DROID R2 D2 smartphone.  If you’re not so inclined to buy the $250 (after mail-in rebate and contract subsidy) for the handset, all Android 2.1 phones with Verizon can atleast get the Star Wars mobile app for $2.99. That gives you a game, photo gallery, live wallpapers, widgets, and other intergalactic goodies.

On a side note, did you know that George Lucas owns the trademark to the word “DROID,” so every time that HTC, Motorola, or Verizon use it, they probably cough up some cash.  Does that explain the $250 price tag?

[via Verizon and Droid R2D2 Site]