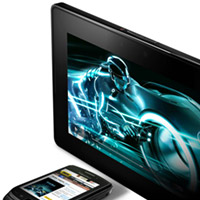 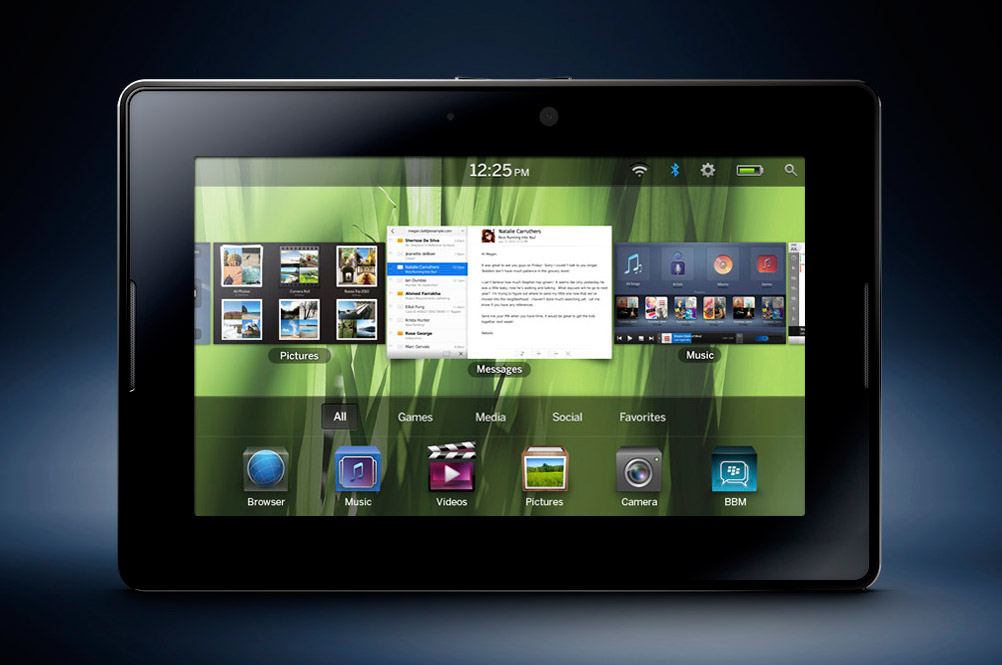 RIM has today announced the BlackBerry Playbook tablet running on the newly revealed BlackBerry Tablet OS. The Adobe Flash touting PlayBook is doing everything Apple missed in their first round, but with millions of units already sold, Apple isn’t breaking a sweat yet. The PlayBook has dual HD cameras for the highest-quality video conferencing available from any handheld device.   It will take on RIMs well-known enterprise level quality, security while offering true dual-core hardware multitasking. POSIX OS is the gateway of this multitasking, its built from the ground up to run WebKit, Adobe Flash, HTML 5 apps, you know, all the good stuff QNX brings to the table.

It’s interesting to see RIM went with a 7” LCD display with capacitive multi-touch, not matching the Apple iPad but the Samsung Galaxy Tab. And that decision leads me to believe RIM is interested in taking the #2 role in the tablet world before Samsung can. What RIM has done is unveiled an entirely new world around the PlayBook, not a product confined to the world of Android flavors by Google, but according to the press release, be a “multitasking powerhouse.”   You can thank the 1 GHz dual-core processor for that, and the fact that developers will be getting an entirely new world to create for the “super app” for PlayBook.

We can expect a US release early 2011, with international markets getting hold of it later in Q2. No pricing released yet, but its surprising there’s only Wi-Fi connectivity now, and 3G/4G models down the road.  Meaning, this may not be something available from your wireless carrier as previously suspected with the BlackTab.  Why RIM left out 3G wireless connectivity is a bold move, and could be due to security restrictions from enterprise clients.

Perfect for either large organizations or an “army of one”, the BlackBerry PlayBook is designed to give users what they want, including uncompromised web browsing, true multitasking and high performance multimedia, while also providing advanced security features, out-of-the-box enterprise support and a breakthrough development platform for IT departments and developers. The incredibly powerful and innovative BlackBerry PlayBook is truly a game-changing product in the growing tablet marketplace.

“RIM set out to engineer the best professional-grade tablet in the industry with cutting-edge hardware features and one of the world’s most robust and flexible operating systems,” said Mike Lazaridis, President and Co-CEO at Research In Motion. “The BlackBerry PlayBook solidly hits the mark with industry leading power, true multitasking, uncompromised web browsing and high performance multimedia.”

The Tablet You’ll Want to Take Everywhere
This beautifully designed and incredibly powerful tablet is ultra portable, ultra thin and super convenient for both work and play. Measuring less than half an inch thick and weighing less than a pound, the BlackBerry PlayBook features a vivid 7” high resolution display that looks and feels great in your hand. With such a unique mix of utility, performance and portability, you’ll want to take it everywhere.

The New Benchmark in Tablet Performance
At its heart, the BlackBerry PlayBook is a multitasking powerhouse. Its groundbreaking performance is jointly fueled by a 1 GHz dual-core processor and the new BlackBerry Tablet OS which supports true symmetric multiprocessing. Together, the abundant processing power and highly sophisticated OS enable the BlackBerry PlayBook to provide users with true multitasking and a highly-responsive and fluid touch screen experience for apps and content services.

Uncompromised Web Browsing
With support for Adobe® Flash® Player 10.1, Adobe® Mobile AIR® and HTML-5, the BlackBerry PlayBook provides customers with an uncompromised, high-fidelity web experience and offers them the ability to enjoy all of the sites, games and media on the web. For more than a decade, the mobile industry has worked to bridge the gap between the “real web” and mobile devices through various apps and technologies and, in fact, a significant number of mobile apps today still simply serve as a proxy for web content that already exists on the web. The BlackBerry PlayBook closes that gap and brings the real, full web experience to mobile users while also opening new and more exciting opportunities for developers and content publishers.

High Performance Multimedia
The BlackBerry PlayBook features premium multimedia features to support high-quality mobile experiences. It includes dual HD cameras for video capture and video conferencing that can both record HD video at the same time, and an HDMI-out port for presenting one’s creations on external displays. The BlackBerry PlayBook also offers rich stereo sound and a media player that rivals the best in the industry.

BlackBerry Integration
For those BlackBerry PlayBook users who carry a BlackBerry smartphone*, it will also be possible to pair their tablet and smartphone using a secure Bluetooth® connection. This means they can opt to use the larger tablet display to seamlessly and securely view any of the email, BBM™, calendar, tasks, documents and other content that resides on (or is accessible through) their smartphone. They can also use their tablet and smartphone interchangeably without worrying about syncing or duplicating data. This secure integration of BlackBerry tablets and smartphones is a particularly useful feature for those business users who want to leave their laptop behind.

Enterprise Ready
Thanks to the seamless and secure Bluetooth pairing experience and the highly secure underlying OS architecture, the BlackBerry PlayBook is enterprise ready and compatible (out-of-the-box) with BlackBerry® Enterprise Server. When connected over Bluetooth, the smartphone content is viewable on the tablet, but the content actually remains stored on the BlackBerry smartphone and is only temporarily cached on the tablet (and subject to IT policy controls). With this approach to information security, IT departments can deploy the BlackBerry PlayBook to employees out-of-the-box without worrying about all the security and manageability issues that arise when corporate data is stored on yet another device.

QNX Neutrino Reliability
The BlackBerry Tablet OS is built upon the QNX® Neutrino® microkernel architecture, one of the most reliable, secure and robust operating system architectures in the world. Neutrino has been field hardened for years and is being used to support mission-critical applications in everything from planes, trains and automobiles to medical equipment and the largest core routers that run the Internet. The new BlackBerry Tablet OS leverages and builds upon the many proven strengths of this QNX Neutrino architecture to support a professional grade tablet experience and to redefine the possibilities for mobile computing.

Key features and specifications of the BlackBerry PlayBook include:

Availability
The BlackBerry PlayBook is expected to be available in retail outlets and other channels in the United States in early 2011 with rollouts in other international markets beginning in (calendar) Q2.
RIM will begin working with developers and select corporate customers next month to begin development and early testing efforts.
The BlackBerry Tablet OS SDK is planned for release in the coming weeks and developers can register for early access at www.blackberry.com/developers/tabletos.
For more information, visit www.blackberry.com/playbook.

About Research In Motion
Research In Motion (RIM), a global leader in wireless innovation, revolutionized the mobile industry with the introduction of the BlackBerry® solution in 1999. Today, BlackBerry products and services are used by millions of customers around the world to stay connected to the people and content that matter most throughout their day. Founded in 1984 and based in Waterloo, Ontario, RIM operates offices in North America, Europe, Asia Pacific and Latin America. RIM is listed on the NASDAQ Stock Market (NASDAQ: RIMM) and the Toronto Stock Exchange (TSX: RIM). For more information, visit www.rim.com or www.blackberry.com.

Forward-looking statements in this news release are made pursuant to the “safe harbor” provisions of the U.S. Private Securities Litigation Reform Act of 1995 and applicable Canadian securities laws. When used herein, words such as “expect”, “anticipate”, “estimate”, “may”, “will”, “should”, “intend,” “believe”, and similar expressions, are intended to identify forward-looking statements. Forward-looking statements are based on estimates and assumptions made by RIM in light of its experience and its perception of historical trends, current conditions and expected future developments, as well as other factors that RIM believes are appropriate in the circumstances. Many factors could cause RIM’s actual results, performance or achievements to differ materially from those expressed or implied by the forward-looking statements, including those described in the “Risk Factors” section of RIM’s Annual Information Form, which is included in its Annual Report on Form 40-F (copies of which filings may be obtained at www.sedar.com or www.sec.gov). These factors should be considered carefully, and readers should not place undue reliance on RIM’s forward-looking statements. RIM has no intention and undertakes no obligation to update or revise any forward-looking statements, whether as a result of new information, future events or otherwise, except as required by law.

The BlackBerry and RIM families of related marks, images and symbols are the exclusive properties and trademarks of Research In Motion Limited. RIM, Research In Motion and BlackBerry are registered with the U.S. Patent and Trademark Office and may be pending or registered in other countries. Wi-Fi is a registered trademark of the Wi-Fi Alliance. All other brands, product names, company names, trademarks and service marks are the properties of their respective owners. RIM assumes no obligations or liability and makes no representation, warranty, endorsement or guarantee in relation to any aspect of any third party products or services.