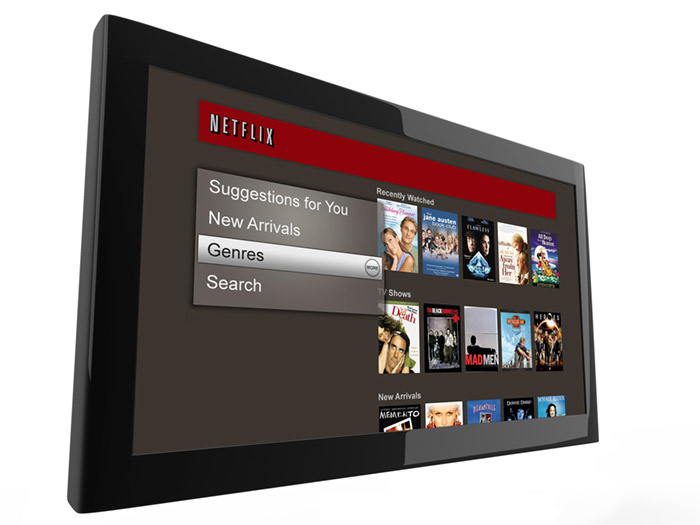 Netflix for Canada has launched today, giving access to unlimited movies and TV shows streamed right to your device for just $7.99 a month. The service is available to PCs, Macs, PS3, Wii, iOS devices (iPad, iPhone and iPod Touch) and even Samsung and Toshiba Blu-ray disc players. Netflix plans to add streaming support to XBOX 360 later this fall, VIZIO and Insignia Blu-ray players down the road, as well as Internet TVs from Samsung and Apple TV.

I had the chance to test the service on the iPad. The download takes a few minutes, you will ned a credit card to enable the trial. This will give you the first 30 days free, and billing will commence at $7.99 CAD a month thereafter. After your account is created and you login, Netflix asks you a series of questions to better know your “viewing interests”. This basically allows them to tailor the home screen to your liking. Not much use putting The Wolfman on your home page if you really don’t watch horror films.

The New Arrivals section is hardly new, it lists Memento (2000), An Education (2009), Pursuit of Happyness (2006), The Jane Austen Book Club (2007) and About a Boy (2002) under the first row of “New movies to watch instantly.” I’m not at all sure I understand this, as none of these titles are even new to Canada. Having a deeper look at all the new titles, show even more “new titles” according to Netflix’ availability. I’m assuming this is a licensing thing with the studios, so I wouldn’t expect it to change anytime soon.

Watching a film from your iPad is simple, just click “Play” from the Netflix menu and wait for it to buffer. This can take a few seconds to a few minutes, depending on the speed of your internet connection. For the iPad, The picture is what you would expect, slightly compressed and a bit saturated. Letterbox films without a doubt will waste a couple inches on the top and bottom, but you do get the full width across. I must say the streaming quality is quite good, with only one Wi-Fi bar I was able to watch The Pursuit of Happiness with only a few hiccups.

There are no in-app brightness or contrast controls which would have been really nice, brightness at the least is important to control when watching compressed media. Tap the screen once when a film is playing and you will get “pause” or “rewind 30 seconds” buttons, volume control, and a slider.

If you’re looking for a simple way to load up movies and TV shows anytime, anywhere, on multiple devices (so long as they are connected to the internet), Netflix Canada for $7.99 is quite a steel. But don’t cut up that rental card just yet, you’ll still need it to get the latest titles.