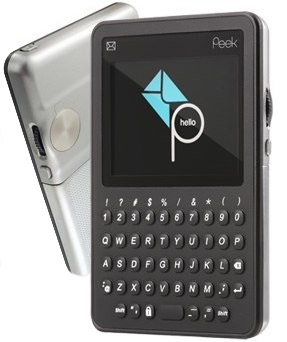 Do you remember the Peek? It might look like a QWERTY packing smartphone, but the only thing it can really do is send and receive email. In this day and age of smartphones that do so much more, why on Earth would you want a dedicated email device? Well, that hasn’t stopped the unveiling of the new Peek 9.

Yes, it’s a “brand new” device from the same people that brought you the other Peek devices in the past. From the outside, it looks an awful lot like its predecessors, featuring a color display and a hardware keyboard. Considering that they had a hard time selling the “lifetime” service for a significantly reduced price, I don’t fathom that the new Peek 9 will make huge waves either.

If you must know, the Peek 9 can do a little more than just email, but it is a text-only device. No voice calls. Beyond email (with support for MS Exchange), the Peek can do text messaging, social networking, PeekMaps (but no GPS), and even “PeekTop Apps.” Those are apps managed in the cloud; Like a built-in streaming RSS reader, view Word and PDF documents, open spreadsheet attachments, and support for Microsoft Outlook Exchange ActiveSync.

The Peek 9 itself is cheap at $70, but you’re still forking out $20 a month for very limited functionality. My advice? If you want email on the go without the smartphone premium, get one of those cheap messaging phones instead.