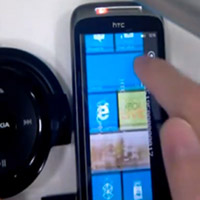 As iOS and Android continue to pick up steam, players like Nokia’s Symbian and Microsoft’s Windows Mobile are struggling to keep up. Windows Phone 7 could change things around for the latter and now we’re getting the full specs for the upcoming HTC Mozart smartphone too.

We already knew that this phone was coming down the pipeline and that it would be rocking the new Windows Phone 7 platform. What we have learned now is that the processor will be of the 1GHz Qualcomm QSD 8250 variety, accompanied by 512MB ROM, 8GB storage, 576MB RAM, a 3.7-inch WVGA Super LCD, and 8MP camera with xenon flash.

The initial specs call for 900/2100 UMTS/HSDPA plus quad-band GSM/GPRS/EDGE, so it’s liklye a Euro-only release initially, but that’s not to say a NAM version isn’t also in the works. As far as specs go, it’s pretty middle of the road, so we’ll really have to wait and see if WP7 is really everything that Microsoft says it’s cracked up to be. Otherwise, the Mozart is just going to get lost in the symphony among the many other phones on the market.