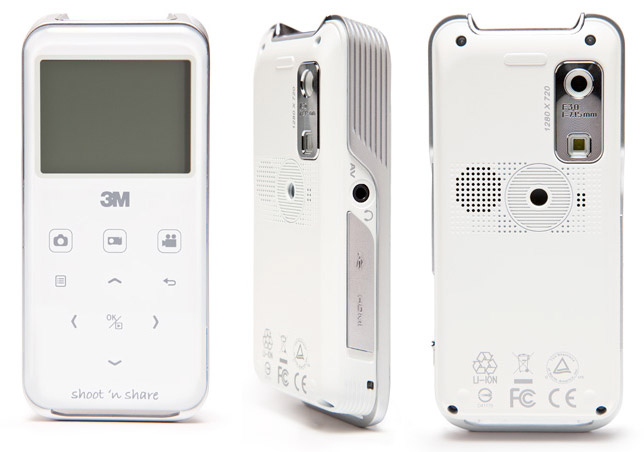 The pico projector concept has been hovering around for some time now, although a great idea, how practical its uses are remain to be seen. Despite this, 3M has announced the Shoot ’N Share, a 720p MP4 video camera that will project a paltry 640 x 480 picture on to a wall or screen.

With 15 lumens of LED light you would imagine that the image would be difficult to see in normally lit rooms, but the guys at Engadget say it’s “actually bright enough to make out.” That doesn’t sound too appealing, and barely acceptable for anything other than watching a home movie.

The microSD slot allows for 32GB of storage, you can capture up to 20 hours of 720p video with that much space. It also allows for 5MP still shots. With HDMI output, composite video/stereo input, and the 3M name, expect to pay about $300 for this first generation combination projector/camcorder.

ST. PAUL, Minn. (September XX, 2010) – What do you get when you combine a movie theatre with a film production studio, all in a pocket-sized, portable package? The new 3M Camcorder Projector Shoot ‘n Share. The latest addition to the award-winning 3M family of pocket projectors, the Shoot ‘n Share gives people the ability to shoot – and instantly share – high definition video virtually anywhere.

“In the past, if people shot home videos, they would have to first upload and then e-mail or post them to a social networking site in order to share with friends and family,” said Mark Colin, vice president, 3M Mobile Interactive Solutions Division. “With the Shoot ‘n Share, we’ve combined the power to create with the ability to project the video so people can create and instantly share their memories.”

The Shoot ‘n Share allows users to capture and project hi-definition video against any flat surface at 15 lumens brightness and VGA resolution. The Shoot ‘n Share also has a MicroSD card slot so users can archive footage, or even project still or moving images captured with a different device.

The 3M Shoot ‘n Share will be available beginning in October from amazon.com and shop3m.com with an estimated price of $299. For more information, visit 3mpocketprojectors.com.