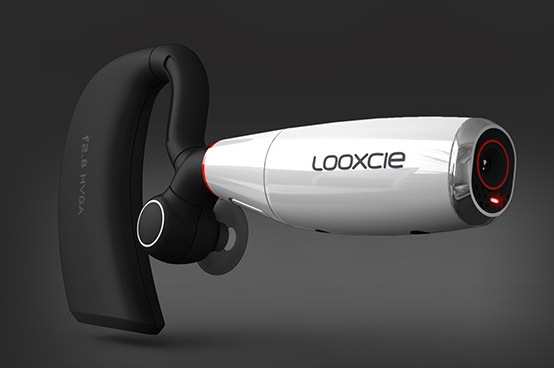 Sometimes its scary when the future of technology stares you right in the face, quite literally with the Looxcie. It’s a full on mobile surveilance system that brings us into a horrific privacy debate regarding “always on recording.” Regulations need to be put in place with this type of technology, perhaps to only be used as an enhancement for law enforcement agencies. It is such a small and insignificant looking device that anyone could be recording at anytime, anywhere, without anyone knowing it.

These days the majority of Bluetooth devices are used to transmit audio via cell phone headsets, the Looxcie is a Bluetooth camcorder that will continuously record a live realtime audio/video feed to your Android smartphone. A 5 hour buffer allows you to snag 30 second clips just incase something spectacular had occurred and you wanted to save it.

Of course, before your social distribution takes place, you may want to edit out any “revealing” scenes that may have accidentally been captured, so the Looxcie app offers a bit of functionality in respects to editing your videos and uploading to various destinations.

I personally don’t care about surveillance, its just another big brother intimidation routine. If it ends up catching someone in the wrong, it was worth it all along.

According to Looxcie’s customer service, their product is ready to ship except Amazon has had issues in listing it; that should be cleared up any day now. It retails for $199 USD, features an obscure HVGA (640 x 240) resolution, 4GB of onboard memory, and a 365mAh fast-charge battery that gives you 4+ hours of video recording time.