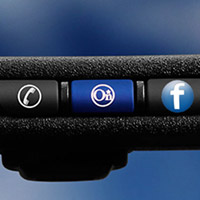 You know how there are several jursidictions that have banned the use of cell phone use while operating a motor vehicle? That includes both voice calls or text messaging. Another thing you can’t do is update your Facebook status, but thanks to General Motors and OnStar, you may soon be able to do that and much more from the behind the wheel.

The OnStar system is mostly voice-activated and a great way to get emergency personnel to you in the event of an emergency, but Facebook? That seems to be the next feature coming to OnStar via the MyLink interface from GM, and it will be completely handsfree. Facebook posts can be read out to you while you’re driving, you can even go ahead and update your status with OnStar voice recognition technology. OnStar President Chris Preuss says data shows that “there is no correlation between pushing a single button and vehicle crashes.”

The services will begin appearing on the new Chevy Volt, making Google Android and Apple iPhone apps accessible through MyLink. There’s one hitch with FaceBook, it wont accept audio files. You see, the OnStar system records your voice message to an audio file, then what? MyLink will have to translate that audio file to text before posting to FaceBook. How will OnStar handle this? Their launching a developers’ challenge to entice people to write apps for GM’s vehicles. Of course OnStar will have to be very careful about which apps they approve, “But the reality is that crashing a phone with a bad iPhone app is a little different from crashing a car with a bad iPhone app,” Mr. Preuss said. Until a jailbreak for your GM is released. GM plans to offer this service first in 2011 models, other OnStar-equipped vehicles will follow after that.