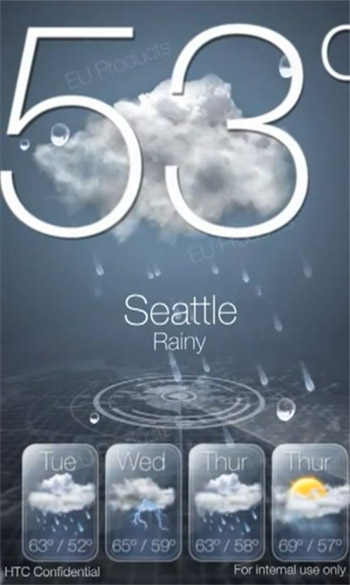 Samsung has the TouchWiz thing for its smartphones and Motorola does MOTOBLUR. Over at HTC, they have the Sense UI for Google Android, so it only makes sense that they’d want to customize the user interface on their Windows Phone 7 devices too. And now we get the first look at how these customizations will work.

In this video we are given a look at four different widgets (or are they full applications?) working on an HTC-overlaid Windows Phone 7 device. First, the notes application looks like some of the widgets you may already be enjoying on your Windows PC for taking notes. The sticky notes can be taken off the virtual tack board, flipped around, written on, and returned.

Second, there is the weather application that has some features in common with the Android equivalent. When it scrolls to the weather in Seattle and it’s raining, it looks like some of the raindrops are actually attaching to the device’s screen. The stock widget comes third and it’s more straightforward with different graphs in both portrait and landscape mode. And then there’s a “loves me, loves me not” flower petal widget.

All in all, the user interface looks very graphically intense with a lot of transitions and animations, including animated backgrounds. It looks really good, but I’d be concerned about battery life and possible lag. Until we see it on an actual device, we can’t really say how smooth it will be.