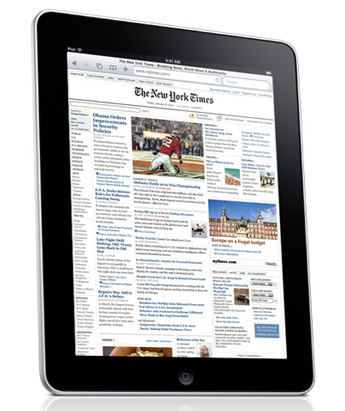 When I first heard about the Amazon Kindle and Whispernet, I immediately thought that it’s newspaper and magazine subscription model was superb. Now, as the iPad is being viewed as a suitable Kindle alternative, it seems that Apple wants offer up newspaper subscriptions too.

Chalk this one up in the rumor column for now, but there are reports that Apple is working out a revenue sharing model for newspaper subscription plans that will miror apps in the App Store. I can’t say for sure whether you’d get the “push” delivery of newspapers like you do on the Kindle, but I don’t see why you couldn’t with the iPad on an opt-in basis.  Apple may also use an opt-in function “to allow subscribers to share their personal information with publications.” This demographic data can then be shared with advertisers by the newspaper publishers.