Just Mobile has “just” released an iPad stylus that allows you to take control of your touchscreen iDevice without smudging up the entire display.  The chunky Alupen is a stick 4.75″ thick stick of aluminum in the shape of a pencil, it has an “Ultra-soft rubber nib” on one end which is smooth and finished in matte black.  I call it the giant crayon for Apple nerds.

Here is why you want one of these types of styluses over the typical tacky type. The AluPen uses a different type of touch mechanism that lets you slide across the screen. It’s designed for capacitive touch screens and will slide effortlessly across your display with a slight drag. Some styluses have a shiny nub on the end that will stick to your display, and usually will require you to press extra hard when tapping. The AluPen is responsive, but lacks precision. So does a big fat finger, so I wouldn’t see this device as being an item to allow for more accurate use of drawing and writing apps, but as an alternative to your finger. Why would you want an alternative to your finger? Good question, I suppose you could just pickup a sausage, but an AluPen would be a more typical solution to using a touch device in cold temperatures. The other benefit is you don’t have your entire hand blocking a part of the screen, effectively adding about 5-inches to your touch reaching capabilities. This is particularly troublesome in games like Spirit HD, where you often get killed by an object that your fat hand covered up. 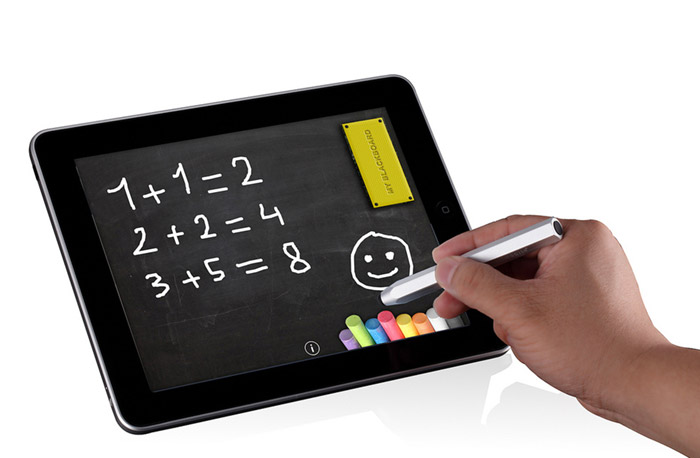 I found it more useful in dragging sliding apps that didn’t require any precise movement or control. Not because it can’t be precise (as much as your finger can be) but I found myself sliding too fast for the iPad to recognize the touch. One concern was dropping it on the screen, since it is a solid metal if it were to somehow clumsily escape your grasp and hit the screen there is a possibility of damage. Although I cannot claim to have experienced this, I do suspect it would be possible. But dropping your iPad off the kitchen counter is also possible. So caution must be taken no matter what you do with your iDevice.

The Alupen stylus is an extension of Just Mobile’s Aluminum accessories for Apple products. It’s being sold for iPad, iPhone and iPod Touch specifically; it does work work on any other capacitive touch display device – like the Samsung Galaxy S. However using a big crayon on a small screen seems a little less natural than on the giant iPad. The price is $19.95 and its shipping immediately.