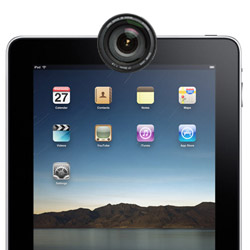 There’s a rumor going around that Steve Jobs and the rest of the crew in Cupertino are already planning an updated version of the iPad and this new tablet will be available in time for the holiday shopping season. The kicker is that yet unnamed iPad (iPad Pro? iPad Elite?) will have a built-in camera.

This is possibly a response or a pre-emptive strike against the flood of tablets that are coming down the chute in the next few months. These mostly Android-powered devices come with features that the current iPad does not have, like a camera. Throw a shooter in there and the iPad can stay on top.  And with them releasing a new OS for iPad, FaceTime can’t be left out.