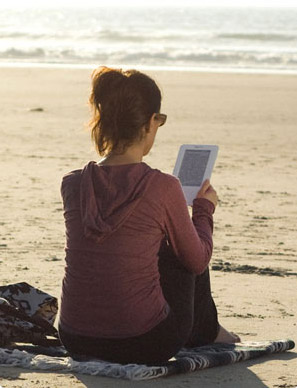 When the Amazon Kindle first hit the market, we were all amazed by its e-ink display and its ability to seamlessly integrate through WhisperNet to Amazon’s online store. And then, the iPad came along and reminded us that we most prefer multifunction devices. Does that mean the standalone e-reader is dead? No, not necessarily.

Steve O’Hear of TechCrunch has declared that he is a “total Kindle convert,” despite recognizing that the iPad, Samsung Galaxy Tab, and other devices like it could represent the “nail in the coffin” for dedicated e-book readers. Why buy something that can only do one thing when you buy something similar that does many things?

Simple. It’s because the Kindle only does one thing that it can still win over consumers, especially the anti-iPad crowd. According to O’Hear, the Kindle “forces” him to go off the grid and get away from the “background hum” of being always connected. The Kindle doesn’t do Twitter. It doesn’t push email. It doesn’t distract you with all of that “always online” stuff, unplugging you from the matrix and letting you relax with a good read.

I agree that it is important to “go off the grid sometimes,” but I’m not sure if there are enough people out there to support the dedicated e-reader compared to those who want the multifunction device. Think of it this way: how many people want smartphones and how many want phones that do nothing but voice calls?

The case for the dedicated e-reader: When it’s time to go off the grid [TechCrunch EU]
Photo: Flickr