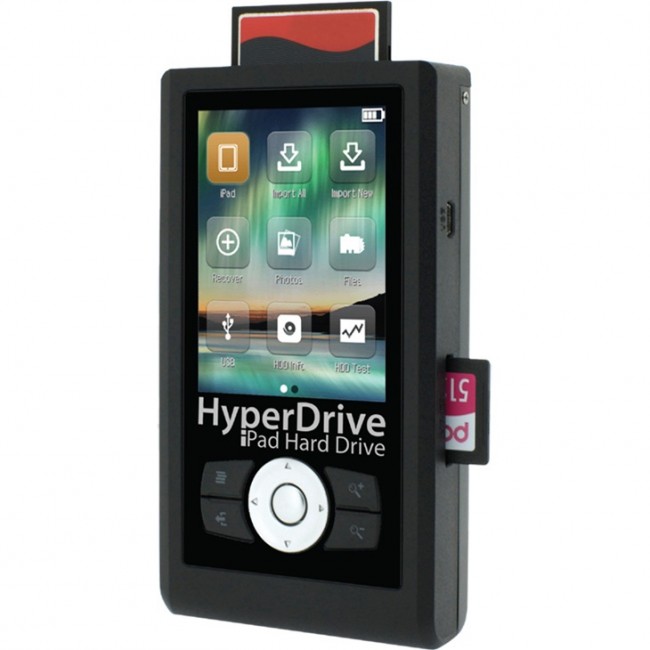 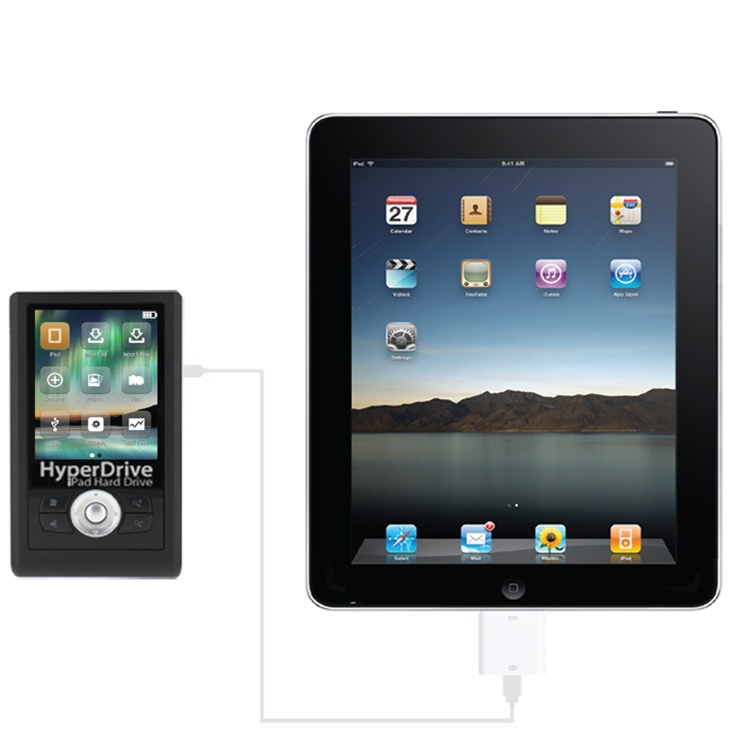 The Apple iPad is a pretty well-rounded product, but it’s missing some rather important features. What if you need to read an SD card? What if you need extra storage space? You can enjoy both with the HyperDrive attachment. This handy attachment is best marketed as the iPad Hard Drive.  Featuring a 3.2-inch touchscreen, it will attach directly to your Apple iPad and give it access to the on-board multi-card reader. It supports 12 different memory card formats too, and you can transfer the contained data to and from the iPad.

The HyperDrive also boasts its own internal hard drive, giving your iPad access to even more data storage. The cheapest version is $249 and only comes with the casing, so you’ll need to provide your own 2.5-inch SATA drive. From there, it ramps up to the highest model with its 750GB hard drive at $599.

If you’ve ever had one of those “photo bank” devices for traveling, you’ll be happy to hear that the HyperDrive can do that too. Go ahead and dump the photos off your memory cards onto the HyperDrive’s hard drive and keep shooting. It also displays histogram information, card reading speeds, and a user-replaceable 3.7V, 2600mAh battery.

HyperDrive – The World’s First And Only iPad Hard Drive

Carry 750GB of HD video and photo, always accessible to the iPad

09.07.2010 – BERLIN, GERMANY – Sanho Corporation (IFA Hall 15.1, Booth 216), the company behind the HyperMac battery packs for Apple iDevices today unveil the HyperDrive, the only hard drive in the market that can connect directly to the iPad without using a computer. Using the HyperDrive, users can store up to 750GB of high definition video and photos, easily sending them to the iPad for viewing anytime. HyperDrive is also a memory card backup device with 2 card slots to directly backup from 12 different types of cards and a 3.2″ color LCD screen for photo viewing and file management.

Using the Apple Camera Connection Kit, the iPad is able to connect to SD cards and self-powered USB devices. However there is a size limitation of 32GB, making it impossible for larger USB hard drives to connect to the iPad. HyperDrive iPad Hard Drive overcomes this limit with its unique patent pending ability to turn individual file folders into virtual 32GB drives on the fly that is readable by the iPad.

Users can first transfer their entire movie and photo library, organized into folders on the HyperDrive. They can do so by connecting the HyperDrive to their computer via USB or copy directly from memory cards via HyperDrive’s built-in card slots. Once that is done, users will have up to 750GB of media accessible to the iPad anytime.

“HyperDrive iPad Hard Drive lets you carry your entire HD movie and photo library with your iPad,” says Daniel Chin, President of Sanho Corporation. “HyperDrive is as compact as your portable USB hard drive and yet at capacities up to 750GB, can hold more data than your laptop,” he added. “The iPad is the perfect media player but its capacities are limited and it requires a computer and iTunes to transfer media to the iPad,” he continued. “HyperDrive releases the iPad from this restriction and truly turns it into a media consuming device,” he concludes.

Like its predecessors, HyperDrive iPad Hard Drive is also a memory card backup device capable of downloading data from 12 different types of memory cards in 2 of its built-in card slots at speeds up to 40MB/s (or 2GB/minute). The HyperDrive will be useful for photographers and videographers who want to perform backups in the field or simply capture more photos and videos beyond what their memory cards allow.