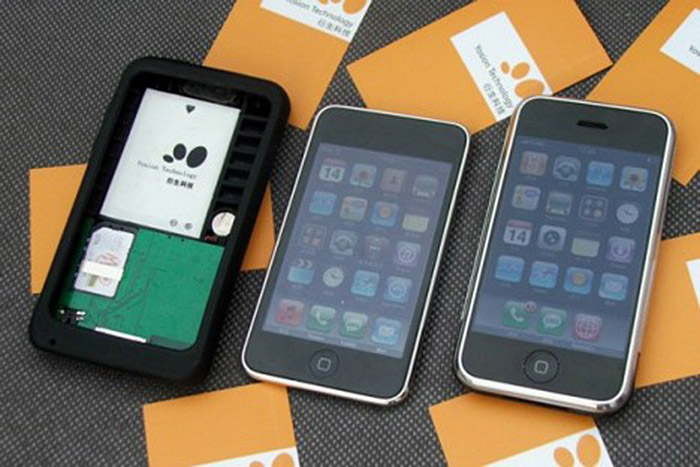 The Apple Peel 520 boarded a ship and is coming to America, according to an email sent out by GoSolar PR. The device has just, literally this afternoon, been submitted to the FCC with its 8k filing to finalize its presence. That means that the once Chinese Yosin black market device of 22-year-old Chinese programmer Pan Yong, will soon be a legitimate product in the USA by GoSolar.

“We see the Apple Peel 520 as a stunning breakthrough in mobile technology, and we’re proud to work with Yosion to develop this product for the U.S. market” said Tyson Rohde, President of GSLO in the press release.

The Apple Peel 520 converts the iPod Touch into a working smartphone, adding an 800mAh battery that offers nearly five hours of talk time and 120 hours of standby use, dock connector and SIM card slot to the iPod. Although it takes a 3G sim card, it will not allow for 3G data at this time. It will cost around $60 and early reviews have indicated some issues with the devices software. Updates, release date, and more details to follow as we get them. Check the PR below for the full announcement.

Both companies signed a funding option agreement last week. Under the agreement, GoSolarUSA will work with Yosion to develop the Apple Peel 520, distribute it in the U.S. and secure intellectual property rights for the device worldwide.

When used with Apple’s (NASDAQ: AAPL) iPod Touch, the Apple Peel 520 functions as a protective skin that adds mobile voice and text messaging capabilities to the touch-screen media player. The startling new technology represents a more affordable alternative to purchasing Apple’s pricier iPhone, and with 275 million iPods already on the market, the Apple Peel could be an instant hit. Yosion announced last week that September’s initial manufacturing run is already sold out.

“We are so pleased to have reached this agreement with Yosion,” said Tyson Rohde, President of GSLO. “We see the Apple Peel 520 as a stunning breakthrough in mobile technology, and we’re proud to work with Yosion to develop this product for the U.S. market.”

The Apple Peel 520 is the creation of 22-year-old Chinese programmer Pan Yong. The gadget slips over the iPod Touch’s case and includes a battery, dock connector and SIM card. Once the proper software is installed, the Apple Peel adds the ability to make voice calls and text messages using the iPod Touch. When fully charged, the Apple Peel’s 800mAh battery offers nearly five hours of talk time and 120 hours of standby use.

The Apple Peel 520 first made waves online in the U.S. last month when it was featured on CNN.com [http://articles.cnn.com/2010-08-16/tech/china.apple.peel_1_apple-smart-phone-iphone-ipod?_s=PM:TECH] and earned positive buzz from Engadget.com [http://www.engadget.com/2010/07/28/ipod-touch-turned-into-a-phone-using-yosions-apple-peel-520/], among other Web sites.
“For right around $60, this device really does transform the iPod Touch into a smartphone,” Rohde said. “If there is a hotter iPod accessory anywhere in the world, we certainly haven’t seen it.”
The option agreement signed by both companies on Wednesday requires that both parties negotiate in good faith to reach terms on a profit-sharing agreement. It has been filed as a material contract with GSLO’s public filings.

GoSolarUSA is dedicated to aggressively acquiring, developing and marketing promising and potentially profitable technology. The iPod Touch and the iPhone are products of Apple Inc., which competes in the global smartphone market against the Google (NASDAQ: GOOG) Android and Research in Motion’s (NASDAQ: RIMM) BlackBerry line.
For more information, please visit www.GoSolarUSA.com.

About GoSolarUSA, Inc. (OTC: GSLO)
GoSolarUSA identifies and develops new solar energy technologies in the United Sates. Our motto is “Invent it here, Build it here and Sell it to the World!” While green technologies like wind and solar manufacture their products in China and Europe and import them to the U.S., we are focused on developing and manufacturing our products in the United States. We believe this not only creates high-quality jobs in America, but it insures the quality and availability of our products. GSLO is endeavoring to advance clean American solar technology to compete in an energy industry that includes stalwarts such as First Solar (NASDAQ: FSLR). GoSolarUSA is a US registered and reporting OTCQB market tier company.

Safe Harbor Statement under the Private Securities Litigation Reform Act of 1995: This news release contains forward-looking information within the meaning of Section 27A of the Securities Act of 1933, as amended, and Section 21E of the Securities Exchange Act of 1934, as amended, including statements that include the words “should,” “believes,” “expects,” “anticipate” or similar expressions. Such forward-looking statements involve known and unknown risks, uncertainties and other factors that may cause the actual results, performance or achievements of the company to differ materially from those expressed or implied by such forward-looking statements. In addition, description of anyone’s past success, either financial or strategic, is no guarantee of future success. This news release speaks as of the date first set forth above and the company assumes no responsibility to update the information included herein for events occurring after the date hereof.