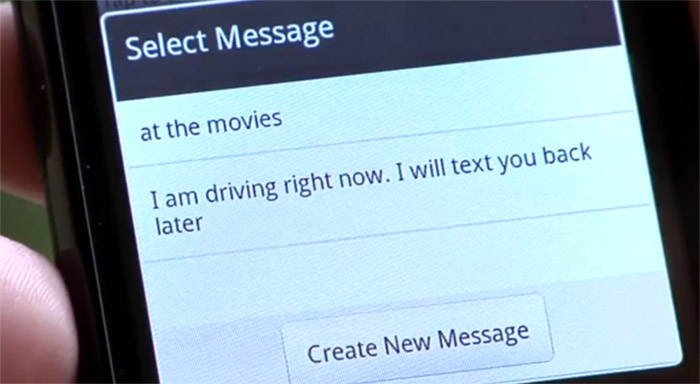 You know how there are all sorts of laws in place now that prevent you from using your cell phone while driving? To help you keep your eyes on the road (and your car out of the ditch), State Farm has released the new On the Move app for Android phones.

Basically, when you receive a text message from your friends, family, or co-workers, the On the Move app will automatically respond to the message, telling them that you are currently driving and can’t be reached at the moment. Yes, it’s a canned response, but it means you don’t have to reply and they don’t have to feel neglected.

To get it to work, all you have to do is make sure the app is active before you get your hands on the steering wheel. What about those automated messages that you might receive from your carrier (or other services)? You can prevent auto-replies to those by setting the app only to respond if hte sender is in your contact list.

The On The Move app for Android will not, however, detect when your car is actually in motion. If you happen to pull over to respond to a text and the app is still active, it’ll still send out the pre-determined message. Even so, this looks pretty cool.

You can expect to see other mobile versions shortly: “Though our initial﻿ launch of this feature is limited to Android phones, we are actively looking into ways to make the feature available on other mobile platforms as well.”

Bloomington, Ill. (August 19, 2010) – On Monday, August 23rd, State Farm Insurance Company will release the insurance industry’s first Android widget aimed at combating the problem of distracted driving. The new “On the Move” widget allows Android smartphone users to compose and preload customized messages that can be sent as automated responses to incoming text messages. With the service, instead of reading and responding to text messages while driving or otherwise occupied, smartphone users can activate the service and let the widget respond for them. The service is free to anyone with an Android smartphone as part of State Farm’s updated Pocket Agent® for Android™ application.

“It is our hope that this widget will prevent crashes and save lives,” said Laurette Stiles, Strategic Resources vice president at State Farm. “This new service will help drivers manage the temptation to read or respond to text messages when they are behind the wheel. We wanted to make this widget available free-of-charge as just one of the ways we’re working to keep our roadways safe for drivers.”

The National Safety Council estimates that 200,000 crashes each year are caused by drivers who are texting. State Farm is a leader in research and programs aimed at preventing distracted driving and other forms of dangerous driving.

With the service, Android owners can create their own responses and save them to a library for future use. The service works with all incoming texts, or can be limited to senders listed in the user’s smartphone address book. Activating the service prior to driving is just one way to use the widget. Smartphone users also can use the service while in class, at the gym or in a movie.

“On the Move” users simply activate the auto-response function by turning on the widget and composing or selecting auto-response messages. Incoming text messages are still received and can be accessed in the user’s inbox at any time.

“On the Move” joins an array of other automated text-response applications available to manage how people respond to text messages when they are otherwise occupied. This is the first offered from an insurance company, and it is free.

“On the Move” is the newest product from State Farm’s Employee Innovation Challenge, a program that sourced input and ideas from thousands of employees. Final market development and deployment was accomplished through a partnership between the company’s business and information technology departments.

“It’s amazing what can rise to the surface when you unleash the collective power of thousands of employees,” said Susan Hood, Claims vice president at State Farm. “So often our people are required to pick up the pieces in the wake of a car crash. This type of innovation helps us prevent such tragedies from happening in the first place.”

The service is the latest addition to the State Farm suite of mobile tools, which includes Steer Clear™, mobile banking, and Pocket Agent™.

It will be available on August 23rd via the Android Market. “On the Move” is compatible with Android OS 1.5 and higher. Upon updating State Farm Pocket Agent™, Android users will be able to access “On the Move” through a widget available on smartphone home screens.

The service is not available at this time on BlackBerry, Windows Mobile phone or iPhones but the State Farm development team is currently evaluating options beyond the Android offering.