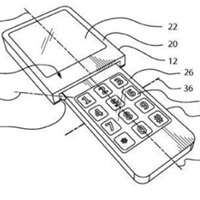 Can’t decide if you want to have a numeric keypad or a full QWERTY keyboard? Want to completely stand out from the crowd with how you choose to use your smartphone? It turns out that Research in Motion could be taking its BlackBerry brand in bold new directions (no pun intended).  What you see here is a patent that was published last year and has recently showed up in the public domain from RIM. The patent application drawings seem to indicate that the phone witll have a strange rotating form factor where you have a separate numeric keypad and QWERTY keyboard.

The drawings confuse me, because I’m having a hard time wrapping my head around exactly how this will work. The keypad portion looks like it can be oriented both horizontally and vertically, but the same can be said about the display. Does this mean that both are on rotating platforms of some kind?

Whatever the case, RIM has demonstrated that it’s not afraid to dabble in new BlackBerry shapes. We’ve already seen touchscreens, flip phones, and — with the Torch — sliders as well. We may soon be rotating with RIM too.