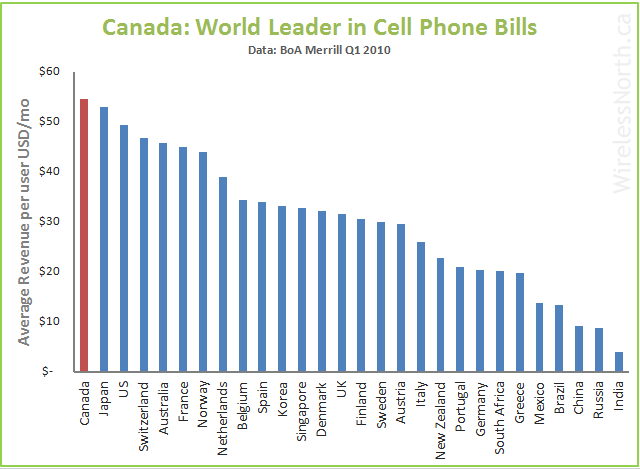 Data plan prices have certainly come down in recent years in Canada, but things aren’t all peachy-keen north of the 49th parallel. In fact, a recent survey has revealed that Canadians are actually paying the highest cell phone bills in the world.

The global telecom report comes courtesy of Bank of America Merril Lynch and it shows that among more than 50 developed and developing nations around the world, Canada comes out on top… but this isn’t the kind of “leader” that we really want to be.

This is based on ARPU (Average Revenue Per User), so it includes your base voice and data plan, as well as any “value packs” or “feature packages” that you may have added. In many countries, things like caller ID are included; that’s oftentimes not the case for us.

Looking here, Canadians are paying an average of over $50 a month for the privilege of using a cell phone. Compare that to the sub-$40 a month that the Dutch pay, the $30 a month that Italians pay, and the sub-$10 that Russians pay. This also hurts mobile penetration too. Something needs to change.