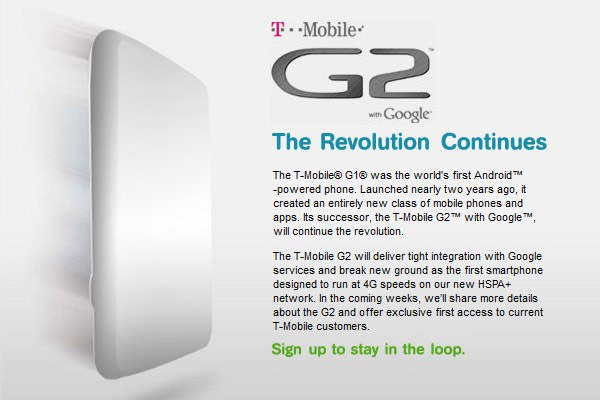 Are you anxious to get your hands on the latest Google-fueled hotness? T-Mobile wants you to look its way, because a teaser site has been set up to promote the upcoming T-Mobile G2. They didn’t get terribly creative with the name, but it is meant to be the official successor to the T-Mobile G1.

As you recall, the G1 was the first smartphone to rock the Google Android. Borrowing a line from Cupertino, everything might be changing all over again with this upcoming handset. The specs are left up for speculation at the moment, but it has been confirmed that this phone will be the first to run on T-Mobile’s new HSPA+ network.

They’re marketing it as running at “4G speeds,” but HSPA+ isn’t technically 4G. For rumors, we’re hearing that T-Mobile will once again be sourcing the hardware from HTC, the device could indeed be the oft-rumored myTouch HD, and it could hit store shelves as early as next month.

They’re not taking pre-orders, but they’ll gladly take your email address and send you a notice when more T-Mobile G2 news arises.

Update: It appears that the image has been pulled from T-Mobile’s website. Not that it really told us anything.