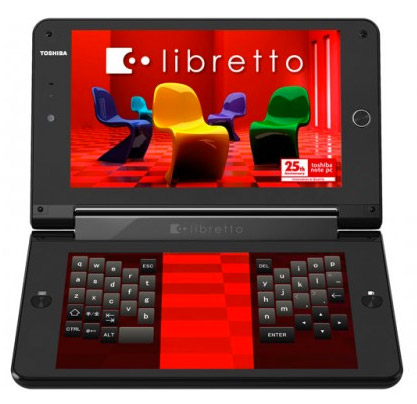 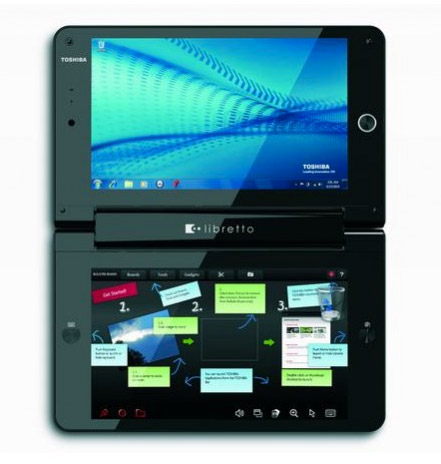 Why stop at a single touchscreen for your portable tablet when you can go for two? That seems to be the core thinking behind the Toshiba Libretto W100 tablet and we’ve found the first unboxing video of the hotly anticipated device. Taking on a form factor very similar to the Microsoft Courier, the Libretto almost looks like a netbook where the physical keyboard has been replaced by another touchscreen display. In this way, you could use as a laptop with a virtual keyboard, or you could rotate it as a book. At least, that’s what the Libretto W100 looks like to me.

The specs include the pair of 7-inch capacitive touchscreens (1024 x 600 pixels each), an Intel Pentium U5400 1.2Ghz processor, 2GB of DDR3 RAM, 62GB solid state drive, WiFi, WiMAX, Bluetooth, webcam, USB port, and microSD slot. Depending on whether you take the two-hour or four-hour battery, the device weighs in at about 1.5 pounds.

The expectation is that the Toshiba Libretto W100 will be a limited production thing and it’ll hit the streets of Japan for about $1,100. By the time you nab one through an importer like Conics, you can expect to pay closer to $1,400. The virtual keyboard apps make this really ergonomic, as they have a dual thumb style app setup, check out the video for it.