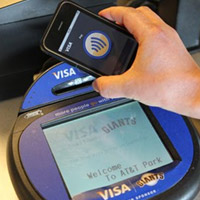 Apple’s latest acquisition of Benjamin Vigier, a man who specializes in near field communications may be the one of the most brilliant moves the California company has ever made. Catapulting the primarily computer-focused business model of Apple into the world of financial institutions. The day your smartphone replaces your entire wallet is coming very soon, and the iPhone could be the first to take us there.

With nearly 2,000 various patents under their belt, Apple has more than a few that are potential candidates for creating such a capable device.

Near Field Communication World reports that the following NFC-related Apple patent applications have come about over the past few months. As you can see, they are all mobile payment or mobile identification related:

It’s unclear what Apple’s plans are with Vigier, but NFC is the type of technology that allows you to wave your credit card over a reader rather than handing it over to be swiped.  The possibilities are endless, “whether buying a ticket at the airport, or scanning an RFID-enabled poster for more information about a concert” said Gizmodo.