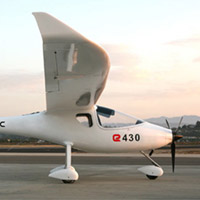 A Boeing 747 flying from San Francisco to New York emits an estimated 5,000 pounds of greenhouse gasses, it also consumes over 12,000 gallons of fuel in that flight.  Although it will be a while before they can compete with the 747, new aircrafts are emerging with “zero-emission” flights.

Aircraft technology has come a long way with new advances of the E430 and the SkySpark.  Last month, the Yuneec International’s E430 won the Lindbergh Electric Airplane Prize at the World Electric Aircraft symposium for its E430, the first commercially available electric aircraft.  Seating two people, the airplane costs $89,000 and flies up to 95 miles per hour.  The E430 operates off a 184-pound lithium polymer battery, which requires three to four hours to charge.  The SkySpark also runs on a lithium polymer battery and set records last year when it reached 155 miles per hour.

Earlier this summer, the Solar Impulse set a new record by flying for 26 hours straight.  With a 207-foot (63-meter) wingspan, the plane was able to collect enough energy from the sun during the day to stay powered through the night.  The experiment demonstrated that in theory, a single-seat plane can stay in the air indefinitely by using 12,000 solar cells to recharge its depleted batteries.

Although not as much as battery and solar, other types of aircraft technologies are also being explored.  For example, the Electraflyer C utilizes a method called regenerative soaring, in which the propeller is used as a wind turbine to generate energy for its lithium-ion-polymer batteries when it flies through an updraft.  Weighing 380 pounds, the Electraflyer C can stay in flight for about 90 minutes and reach speeds of up to 80 miles an hour.  Wireless power transmission has also been tested which sends microwave energy or lasers through the air to an airplane’s receiver.   NASA demonstrated this technique to fly small, unmanned solar crafts.

Next summer, NASA will help run the Centennial Challenges for Aeronautics competition to encourage more flights in the right direction.  In order to enter, aircrafts must surpass the equivalent fuel-efficiency of 200 miles per gallon per passenger.  Considering the greenhouse emissions of a cross country flight, these new technologies may someday save something more important for us than just the cost of extra baggage.