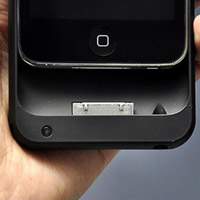 We saw one Apple Peel case that converts the iPod touch into a (nearly) functional iPhone. Then, we saw a second Peel case with Sprint branding. And now, we have a third one to consider.

Although none of these products have really hit the mainstream market just yet, it seems that they’re already becoming old hats. For this third iteration, we find a new case dubbed the tPhone. It also comes from China and it does exactly what the first two cases did.

As before, the tPhone is an iPod touch 3G jacket that gives its some cellular connectivity. With that 3G connection, you can make regular voice calls and send SMS text messages. This “Apple Peel” has a dock to connect it to the iPod touch, along with an internal 1200mAh battery.

This version probably won’t make any official debut outside of China, but there’s always the grey market.  We’re hoping at least one comes out with a usable software package, of course you will have to be jailbroken. Expect many more iterations to come, until finally Belkin releases one.

The tPhone Is Yet Another iPod Touch 3G Jacket [Crunchgear]