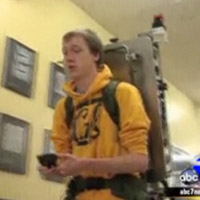 At UC Berkeley, the same team behind 3D views of major cities on Google Earth has created a mapping technology “that scans its surroundings and creates an instant 3D model”. The device takes the form of a backpack, where an array of lasers, cameras, and an Inertial Measurement Unit all combine to form a final product of a 3D, textured model. Lasers calculate geometry of the surroundings, while the cameras capture panoramic textures of the area behind the pack. Although Google Earth’s 3D images were created using GPS technology, the same cannot be said for the 3D Backpack. Since GPS and satellite imagery does not work indoors, the IMU combined with the geometry of lasers, localize the pack, allowing for the precise navigation of an indoor environment.

Professor Avideh Zakhor, who leads the team at Cal Berkeley says, “One day, you’ll have a little pack of sensors on your belt. And, as you walk inside buildings, you collect data about everything. Every location in the universe, both indoors and outdoors will eventually be mapped and we’ll have it all online. So, without ever going anywhere, you can see what everybody’s interior looks like.” Good or bad,  an indoor 3D model would trump having to read those confusing mall maps.

Innovative and cutting-edge, the team at Cal Berkeley is trailblazing into the 3D era.