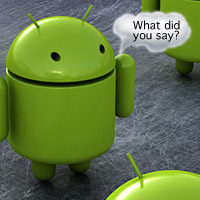 TechVibes brings up a very interesting point about some of the applications on various smartphone platforms. On the RIM front, you have exclusive access to the BlackBerry Messenger. On the iPhone 4, you have FaceTime. Where does that leave Google’s Android?

I think Android has a lot of potential to grow even further that what we are seeing today, but there isn’t much in terms of a “killer” messaging apps that are exclusive to it. TV makes mention of GTalk, but you can get IM clients on BlackBerry and iOS devices to access that messaging utility. Another suggestion put forward is Google Latitude, but the same holds true there too. It’s not exclusive to Android and, as such, it can’t really be thought of as the killer messaging app for the platform. Twitter, Facebook, and other networks can be accessed on just about any platform.

Realistically, though, does it really matter? Does Android really need to have its own separate IM client exclusive of the other platforms? Isn’t the whole “I can chat with anyone regardless of what device they have” part of the appeal in the first place?