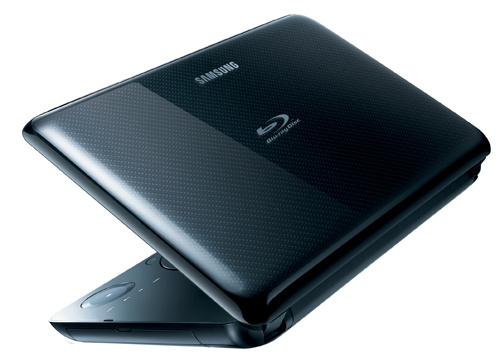 Samsung today launched a 3D-capable portable Blu-ray player, this sucker will play 1080p on its 10.3-inch screen, but don’t go putting on those 3D glasses just yet.

Although it is 3D-capable, it is only capable of outputting 3D. Mobile displays have yet to enter the 3D arena just yet, and Samsung’s BD-C8000 is only meant for outputting 3D to a capable 3DTV. Battery life is only rated at 3 hours, let’s hope that rating is accurate and we’ll at least get to watch a feature length flick. The little player has built-in Wi-Fi and HDMI, and it’s priced at $500, but selling for $449 on Amazon.

With three hours of battery life,the Samsung BD-C8000 is the perfect travel companion for anyone who wants an outstanding entertainment experience while on the go.Samsung also introduced three additional standalone Blu-ray players and three new Blu-rayHome Theater Systems that deliver crystal-clear picture and sound quality with new features that will excite both the first-time owner and the audiophile.”Blu-ray has raised the bar for video and audio quality that consumers expect to see at home.We led the way in 3D TVs and are excited to do the same for 3D Blu-ray players and HomeTheater Systems.

The two HDMI outputs also allow for support of legacy receivers so there is no need to upgrade to a new HDMI 1.4 receiver; the user can simply connect their receiver to the HDMI 1.3 output for rich, lifelike surround sound audio. This sleek and stylish device offers built-in WiFi for seamless connectivity to Samsung Apps. It also featuresSamsung’s proprietary AllShare™, which allows people to wirelessly sync digital devices so that they can enjoy music, movies and photos directly from their DLNA certified PC, camera and mobile devices to their Samsung TV screen.For those looking for a versatile home entertainment experience, Samsung’s BD-C6800 Blu-ray player includes built-in WiFi enabling it to wirelessly receive web-based content via SamsungApps and playback media files from DLNA certified devices via Samsung’s AllShare™. The entry-level BD-C5900 is designed for those looking for a high-performing yet affordable 3D Blu-ray player.

All Samsung Blu-ray players support a wide range of media formats and access to an expanding library of applications through Samsung Apps, the first HDTV-based applications store. These new 3D Blu-ray players deliver a premium experience with both 2D and 3D content and allow consumers to future-proof their living rooms for when they are ready to purchase a 3D HDTV.