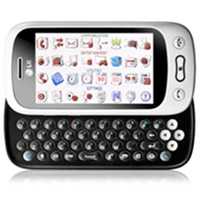 Maybe you want a touchscreen and a full QWERTY keyboard, but you’re less inclined to get a real smartphone with a hefty data plan. If that’s the case, your ears may perk with the pending launch of the LG Neon2 through Rogers Wireless.

We had a look at the original LG Neon last year (the Fido version) and this second-gen version should be a slight upgrade. The specs include a 3.0-inch WQVGA (240 x 400 pixel) touchscreen, slide-out QWERTY keyboard, five hot keys, and a 2MP camera.

You can also expect a microSD card slot (good for up to 8GB of storage), FM radio, MP3 player, Bluetooth, and your choice of four different colors. Looking at the menu screen, it looks like you can access a lot of apps without having to scroll; that looks like four rows of eight icons for a total of 32 virtual buttons.

We haven’t been able to find an official launch date, but dummy phones are reportedly already making their way into stores. Expect to pay $29.99 with a qualifying three-year contract. My gut tells me that Fido might get this too.