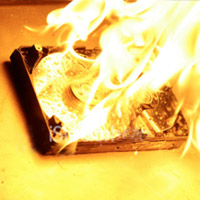 Securing data is important, particularly in a corporate environment where business communications can be critically confidential. Combustion is never an environmentally sound solution for handling confidential materials. Making this a bit more green, and simpler, is the new Wipe technology announced by Toshiba today. It works in tandem with the company’s Self-Encrypting Drive (SED) models.

In short, the technology allows for private data to be fundamentally erased from the hard drives when a system is turned off, or when the SED hard drive is removed from the system. This secure erasure is crucial for when machines are returned, serviced, disposed, re-purposed, or otherwise taken away.

The idea started with notebook computers and all the data that their hard drives could contain coming from data sensitive environments, but it also extends into the realm of copiers, printers, and other similar machines which store images and private data. Many of these systems contain hard drives and, well, you don’t want to keep an image of that confidential social security number, or other valuable document available to peering eyes.

By using Wipe Technology, the data is automatically “invalidated” by the hard drive itself, which is faster than over-write data erasure or physical destruction methods. Not a bad idea from Toshiba.

Tokyo—Toshiba Corporation (TOKYO: 6502) today announced Wipe for Toshiba Self-Encrypting Drive (SED) models, a technology that allows special security capabilities, such as the world’s first[1] ability for sensitive user data to be securely erased when a system is powered-down or when a SED HDD is removed from the system. The feature can also be used to securely erase user data prior to returning a leased system, system disposal or re-purposing. Wipe was created as an enhancement to Toshiba’s Self-Encrypting Drive (SED) hard disk drives.

But lost or stolen notebooks are not the only security risk that IT departments must address. Today, most office copier and printing systems utilize HDD capacity and performance to deliver a highly productive document imaging environment. Many organizations are now realizing the critical importance of maintaining the security of document image data stored within copier and printer systems. Wipe is a technology that can automatically invalidate an HDD security key when its power supply is turned off, instantly making all data in the drive indecipherable. Toshiba’s innovative new Wipe Technology adds advanced storage security features to enable system makers to transparently and automatically secure private data.

Copier and Printer systems vendors can now use Toshiba’s Wipe Technology to securely invalidate sensitive document image data by automatically erasing the SED’s internal encryption key. This feature can easily be used prior to system disposal or re-purposing to ensure that private data never leaves the control of the responsible business unit or IT department.

Toshiba’s Wipe Technology may be used to set data invalidation attributes for multiple data ranges. This flexibility provides systems designers with a powerful set of data security capabilities that can be easily incorporated into existing system architecture. Attributes include …