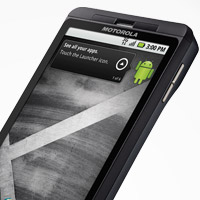 The boys and girls at big red have some big plans for you folks over the course of the next several months. And we have the leaked roadmap to tell you exactly what to expect from Verizon Wireless over the next little while, including a hot number with a 1.3GHz processor.

Verizon is already becoming a preferred home for many Android smartphones, like the Droid Incredible and Droid X, but it seems that Motorola has another one bound for VZW called the Motorola DROID Pro. This’ll rock a 1.3GHz processor, four-inch touchscreen, and global roaming, quite possibly putting the Droid X to shame. Expect to see this in November.

But wait. There’s more. We’re also hearing that Motorola is working on a “slab form factor” device that’ll be similar to the old Motorola Q, except it’ll have a full touchscreen, Android 2.2, and global roaming. More Android love should be coming by way of Samsung and HTC before the end of the year as well.

We also hear about having 75% of the nation covered in LTE by April 2012, a Novatel LTE MiFi device by February that supports up to 10 simultaneous users, and LTE pricing sticking at $59.99 a month for an unknown amount of bandwidth.