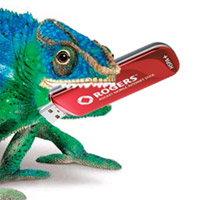 Take that, Rocket Stick? Telus already boasts one of the fastest wireless data networks in Canada, but it’s ready to push the envelope even further with an upcoming 42 Mb/s network for our mobile web surfing needs. To push its current 3G+ network to the next level, Telus is implementing HSPA+ Dual Cell technology. The idea behind this technology is that it uses “advanced multiplexing techniques to combine two wireless data carriers,” each of which can push up to 21Mbps each. Combine these two and you have a single carrier with download speeds of up to 42 Mb/s. That’s certainly impressive.

Telus is proud to say that it is the only carrier in North America to successfully test HSPA+ Dual Cell technology and it says that these faster speeds should be commercially available during Q1 2011. I’m expecting that you’ll need some new hardware, likely in the form of another USB wireless modem, to get these speeds.

VANCOUVER, Aug. 3 /CNW/ – TELUS today announced Canada’s fastest* mobile network is about to get even faster. Using state-of-the-art HSPA+ Dual Cell technology, TELUS will increase its already ultra-fast 3G+ wireless data network access speeds to up to 42 Mb/s when commercial deployment is complete in Canadian cities and towns. TELUS is the only North American carrier to have successfully tested HSPA+ Dual Cell technology in its wireless labs and to announce deployment in its commercial network.

“Once again, the entire TELUS team is proud to be a leader in the deployment of the most advanced wireless technology to Canadians. With the roll out of this new technology, TELUS clients with ‘Dual Cell’ capable devices will enjoy unprecedented download speeds that will support even faster wireless access to an online world that connects them with their families, social networking with friends, favourite entertainment and the freedom to meet their business needs when our clients are on the move,” said TELUS President and CEO Darren Entwistle. “Canadians are amongst the most sophisticated users of wireless data in the world, and TELUS is committed to meeting their growing needs with the best technology available anywhere.”

HSPA+ Dual Cell technology uses advanced multiplexing techniques to combine two wireless data carriers, operating at manufacturer-rated speeds of up to 21 Mb/s each, into a single carrier with manufacturer-rated downlink speeds up to 42 Mb/s. New HSPA+ Dual Cell compatible devices that will allow customers to take advantage of the new network capabilities are expected to be commercially available during the first quarter of 2011.

TELUS is one of only a few carriers in the world to announce HSPA+ Dual Cell deployment. Telstra in Australia is the only operator known to have deployed this capability in its network. The deployment of Dual Cell is consistent with TELUS’ evolution towards Long Term Evolution (LTE) technology, as the company continues to maximize the potential of HSPA+ as an interim step and ensure the most optimal future transition to LTE.

By leveraging the investment TELUS has already made in its 3G+ network, the company is able to support the deployment of Dual Cell technology with a small investment that is well within TELUS’ overall capital expenditure guidance for 2010.

*Comparing TELUS HSPA+ network service to Rogers HSPA+ network service, based on TELUS’ tests of data throughput speeds in large Canadian urban centres. Internet access speed provided by the network operator may vary due to the device being used, network congestion, distance from the cell site, local conditions and other factors. Speed on the Internet is beyond the wireless network operator’s control and may vary with your configuration, Internet traffic, website server and management policies, and other factors.