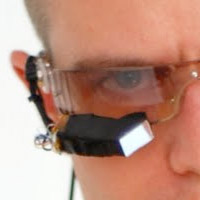 Wishing you could get a little more intimate with your computer? Swedish researcher and entrepreneur, Martin Magnusson has created a wearable computer that stays very close by. The concept behind it is really quite simple, but the engineering within is what makes it so clever. First, Magnusson bought a cheap CD case, ripped out the CD pockets and replaced them with velcro, causing the case to open like a book for all of the components. It’s then attached via a shoulder strap so you don’t have to worry about holding it up constantly or the computer falling off. Magnusson then hacked a pair of Myvu media glasses, connected with his home made machine based on a Beagleboard single computer.   In order to get online, Magnusson uses bluetooth connected to his iPhone.  The Beagleboard is powered using four AA batteries, allowing it to last around three hours, and if that isn’t enough time, he believes you could add battery packs to last all day if need be.   “A computer is a window to the virtual world, but as soon as I get up and about, that window closes and I’m stuck within the limits of physical reality.” Magnusson says. “Wearable computers make it possible to keep the window open. All the time.”

A more realistic scenario would be for Magnusson to build a Bluetooth wireless transmitter for his Myvu glasses, projecting his iPhone display to the glasses and using that as the computer.  All other hardware is really unnecessary, but a fun project I’m sure if you are going for the cyborg look.