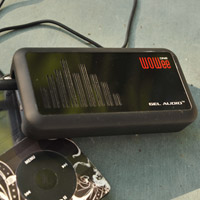 What is the WOWee One? I’m trying very hard to avoid cheesy punchlines, the WOWee is in fact a lot more serious than it’s name exudes. It’s a block of pure bass small enough to fit in your pocket and take with you anywhere. Just slap it on to a hard flat surface and you’ve created a dynamic subwoofer ready to pound out loud.

Some comments you could expect from innocent basstanders would go something like this; “Is THAT what’s making that noise?” or “Wow, is it just that thing?” or even better “Wowee! that thing pounds.” Sorry, I had to do it eventually. Wowee One is a brick of bass; it’s 7 ounces of pounding really makes the table shake. I would rather have this hooked up and stuck to my window than a traditional pair of “computer speakers.” The sound resonates throughout the room as though it was meant to be heard, not played.

Features and Design
The Wowee One is a small portable bass speaker (subwoofer) measuring 4.7 x 2.4 x 1-inches. It’s capable of sending out 90db of sound between the 40Hz – 20KHz range, and creating a dynamic subwoofer out of nearly any flat surface imaginable. It has an internal battery with an estimated 20 hours of playtime per charge. A mini USB port for charging off any computer 5V USB port. A 3.5mm stereo headphone audio input jack. A couple of LED lights have also been added for charging and connection status.
Its internal rechargeable battery is a hefty 3.7 volt lithium-ion pack. It’s a little bit thick, but that’s good in the case of a brick of bass. Wowee One weighs in at 7 ounces. First impressions lead you to think it’s a bit heavy and couldn’t stick to a window, but when both surfaces are clean and free of dust, let me tell you it can stick.

I had it stuck to the window shown in the video below throughout the night with no lack of grip. It only becomes hard to stick when the surface isn’t clean of debris. The gel is really sticky, so it can pick up lots of dirt easily. Just give it a wipe with a damp cloth and you’re ready to stick it again. It can fall off pretty easily if both surfaces are not clean, but it’s so durable that it just takes a bounce as if it new what was coming.


Overall Performance
The estimated battery life rating of 20 hours is indeed that, an estimate. It will depend entirely upon how loud you have it cranked. I could see 20 hours of use attainable at a medium to low volume, but when you have it fully cranked our tests came in at around half of that. One thing to look out for is that the battery keeps draining when a 3.5mm audio connector is plugged into the Wowee One and its not in use. Although there is no audio coming in, even if its not connected to anything at all other than the cable, it somehow manages to lose enough battery power with the blue LED glowing overnight. When you are done making all that noise, unplug the audio jack from the Wowee One too, not just from the output source.

Sound quality is surprisingly clear and crisp. You will get some distortion and bad sounding highs with slapping lows, but that’s if you’re playing highly compressed audio files. If you have CD quality or better, it sounds just right.
This thing projects sound off anything. The bigger and flatter the surface, the better. But as you can see in the second video below, even sticking on the face of something as small as an iPad will create a good bass pounding sound.
Some “friendly objects” to stick it to include; Desks, chairs, tables, hard boxes, inner tubes, floors, windows, coolers, car hood or trunk lid, waste baskets, and iPads. Not so friendly surfaces are stone, grass, pieces of real wood, and very soft or uneven surfaces like a fabric sofa.

All you would need is a 3.5mm audio jack splitter and this could be a supplemental “subwoofer” to your current computer setup. And it’s still easy enough to unplug and take with you. 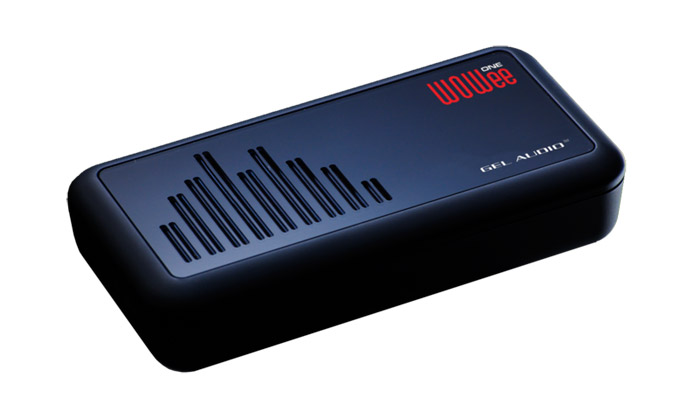 Bottom Line
The Wowee has been out in the UK for some time now, it just saw its North American debut last month, and I must say we have truly been missing out. The Wowee One not only performs, it outperforms. You will not expect sound like this to come from such a small brick-like device. It’s got good weight to it, which could be the reason it’s able to move sound so well across surfaces. There’s definitely an engineering mastermind behind this one. Priced just right at $70 from online retailers. I thought it was a bit high at first, but after I heard its sound it made me think twice. Check out the videos for a general idea of what it sounds like, just imagine it 10x clearer and louder since the file has been YouTubed.

Contest Update
We’re giving away a brand spanking new WOWee One. All you have to do is tell us where you would stick it! The contest is open to the USA and Canada only, a winner will be announced Friday, August 13 so you have until then to enter. Just submit your entry below, goodluck!

Contest Winner
Jerry Brown was randomly selected as the winner. Thanks to everyone who participated!

It wasn’t a clean gel pad, but when it is clean, the Wowee can stick to the window all night.

Nothing worth watching, just skip through it and you can see the iPad moving across the table from its bass.

Videos made with the Flip Ultra HD.