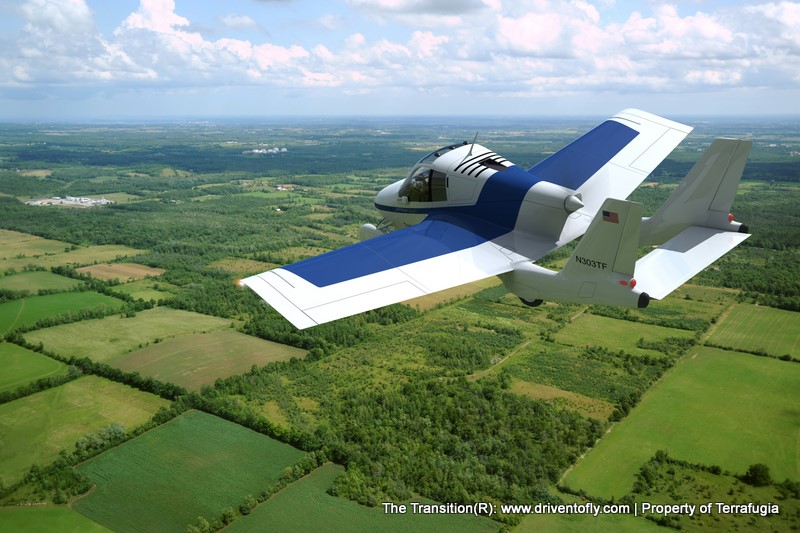 Its not exactly how I had imagined it would be. While classic sci-fi movies like Back To The Future, and The Fifth Element portray flying cars with jet propulsion engines tucked neatly away in the body of an extraordinary looking vehicle, real world engineers and scientists struggle to develop some type of flying frankinmobile that will catapult humankind into a world of three-dimensional travel. The latest creation and attempt at such a feat is the The Transition by Terrafugia (cleverly named “escape from land” in latin).

Presently only taking shape in the form of a computer rendering, 3D model, and proof of concept, the flying car aims to transition flying aircrafts, with road-worthy automobiles. Using all the latest technology available, the Transition has a computer touch-screen interface for all your instruments and indicators. An improved wing design with folding mechanism can be activated from the cockpit, an energy absorbing crush structure with a rigid safety cage protects the passengers, along with airbags and ballistic parachute system for those last minute ejections. All these safety features are extremely important, especially if you plan to take the Transition on the freeway.

A 100 hp Rotax 912S mid-mounted engine spins the prop in flight, but is locked when driving around with it’s rear-wheel drive continuously variable transmission (CVT) and tuned independent suspension.

So far the company has sold 80 in a pre-order blitz reservation costing potential buyers $10,000 a piece. The final ticket is estimated to be anywhere over $190,000 USD.

Design of Next Generation Transition® Unveiled

Oshkosh,WI – July 26, 2010: At a press conference today at AirVenture, Terrafugia, Inc., developer of the Transition® Roadable Aircraft, or “Flying Car”, released specifications and computer graphics of the exciting new Transition®. Terrafugia chose AirVenture, the center of the aviation universe, to unveil a scale model of the next generation design, currently under construction at Terrafugia’s facility inWoburn, MA, to both the aviation press and aircraft enthusiasts
alike. Deliveries of the Transition® are scheduled to begin in late 2011.

The improvements to the design are based on data acquired during drive and flight testing of the Proof of Concept (POC) Transition®, successfully completed in 2009, and extensive computer-aided design and optimization. The recent grant of 110 pounds (50 kg) by the FAA for the Transition® within the Light Sport Aircraft category also allows the next generation design to incorporate modern automotive-style safety features currently unavailable in other light aircraft. Advanced computational fluid dynamics (CFD) with Fluent®, finite element analysis (FEA) with CATIA® V5 and simulated dynamic crash testing – complete with airbag deployment and digital crash test dummies – have all been used to optimize the design and build confidence that the vehicle will meet the stringent Federal Motor Vehicle Safety
Standards. Terrafugia’s Transition® is the only light sport aircraft to simulate crash testing in this manner. When combined with a full-vehicle ballistic parachute system and the ability to drive in bad weather, the Terrafugia team expects the Transition® will prove itself to be one of the safest LSAs in the world.

Some features of note in the next generation design include:

* Automotive-style crash safety features including an energy absorbing crush structure in the nose of the vehicle and a rigid safety cage to protect the occupants.
* A customized, intuitive touch-screen interface in the cockpit.
* An improved wing with an optimized airfoil and a folding mechanism that operates smoothly & safely from
inside the cockpit.
* A pusher propeller with an open empennage that makes efficient use of the 100 hp Rotax 912S mid-mounted
engine in flight and is locked in place when driving.
* Rear-wheel drive with a continuously variable transmission (CVT) and tuned independent suspension for
responsive road handling.

Terrafugia (terra-FOO-gee-ah), based inWoburn, MA, is comprised of a team of award-winning engineers who have been advancing the state of personal aircraft since 2006. Founded by five pilots who are graduates of MIT and supported by a world-class network of advisors and private investors, Terrafugia’s mission is the innovative expansion of personal mobility. “Terrafugia” is Latin for “escape from land.”