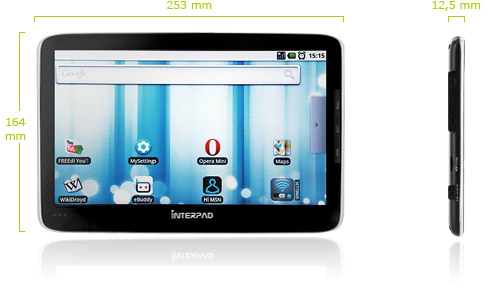 The Apple iPad may continue to be the dominant tablet on the market today, but it may not be the most powerful. A new Android tablet dubbed the E-Noa has an official launch date set for this December, and it’s going to have a crazy 1GHz Tegra 2 T20 dual-core processor. You won’t be alone if you haven’t heard of the E-Noa Interpad, because it’s a largely unknown German company and will likely have a limited release. Even so, it demonstrates what can be possible at an iPad-like price point with an Android-like experience. For the record, the Interpad has a 10-inch capacitive multitouch display, Android 2.1, the dual core Tegra chip, 1GB of DDR2 RAM, 16GB flash memory, microSD slot, WiFi, Bluetooth 2.1, USB 2.0, HDMI-out, and a 3900mAh battery good for up to 12 hours of portable computing. And you’ll reportedly get all this for 399 Euro ($518).