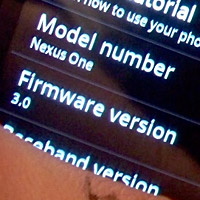 It’s no secret that Google is constantly working on the next version of its Android operating system. It’s also not much of a secret that Gingerbread (Android 3.0) is the next major release. But looking at this picture, it could be the first time the new OS has been spotted in the wild.

Up until now, the only time we’ve seen any inkling of  Gingerbread goodness has been in official form through Google engineers, and well, they have remained pretty tight lipped on any information coming out too early. This shot seems to indicate that they are either field-testing the OS, or someone managed to snag a pre-beta build.  Then again, it’s also very possible that this is a little more than some hackery on the part of an enthusiast. He could have messed with the code so that it displays firmware 3.0 or even easier, a bit of Photoshopping.  What are your thoughts? Is this really Android 3.0 Gingerbread and are you excited for its release? It is being shown on a Nexus One of all devices.