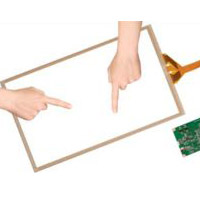 If you remember way back before the iPad was even a concept, Fujitsu had coined the name for their handheld device that was primarily targeted for the retail backend.  Fast forward into the year 2010, and Apple has released their very own iPad, while Fujitsu has now announced a display technology with which they could use to launch their very own tablet device.

Apple has deep roots with the iPad name and Fujitsu might be happy enough to get their own tablet off the ground, with all names aside.  Today’s announcement reveals their newest display technology, a multi-input resistive touch panel that can detect simultaneous inputs by the user.  The multi-input display uses pressure-sensing technology where the user could be applying a finger and stylus simultaneously to the screen.  Resistive screens rely on pressure from your finger, while capacitive (like the iPhone and iPad) rely on the electrostatic field of the human body to create distortion (a change in capacitance).

Fujitsu’s display panels feature “low power consumption, high resolution, high accuracy and register finger or stylus input even when wet.” They will come in a range of sizes, from 5.6- to 12.1-inches and are the first to obtain Windows 7 certification for the resistive display.  Meaning, expect Windows 7 tablets in the 12.1-inch variation to be out shortly.