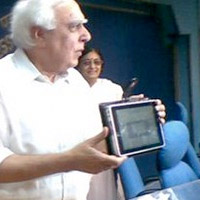 Yesterday we saw the announcement of a $500 tablet coming from India called the Olivepad. Today we have another tablet, this time a prototype also coming from India and is priced at a ridiculous $35. Apparently the price could go to as low as $20 or $10. It will even have green features, like the option to be recharged by solar cells. The OS will be Linux-based, however Android is one of the possibilities. Open Office will be included, a media player, and a host of other free apps.

The bill of materials for the prototype came to $47. Amazing, and no easy feat considering the iPad rang in at $230 for the lowest end model. Universities in India such as the Indian Institute of Technology (IIT) have partnered with the government to develop the low cost components used in the tablet. Students have created their own motherboard and PCBs for the device but have no real manufacturing or distribution plans. A similar scenario from Indian start-up Notion Ink has promised the Adam tablet for quite some time. The One Laptop Per Child Project is also another program which never came to fruition. The odds of this prototype being mass-produced is not in the favor of the students. It does however seem like a great feat of engineering if it can be built at such a low cost (excluding labour I’m sure).