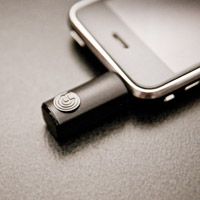 There’s an app for that and now there’s a dongle for that too. You may have already heard about the RedEye, a docking station that transforms your iPod into a home theatre controller. Now the same company has released the RedEye Mini, and it’s finally available for sale. As you can probably fathom from the title, this gadget lets you use your iPhone, iPod touch or iPad as a universal remote for your home theater. The RedEye Mini from Thinkflood plugs into the headphone jack on your chosen Apple handheld, adding an IR transmitter to the mix. After you download the appropriate free app from the App Store, you can change channels and adjust the volume to your heart’s content. It’s all done through the touchscreen interface.

If you’re already rocking some Apple hardware, buying one of these $49 dongles is certainly more affordable than one of those pricey Logitech Harmony universal remotes. It’s available now in 52 countries around the world. Then again, the concept of a universal remote from a PDA or cell phone-like device isn’t new. I remember rocking a universal remote app on my ancient Palm Pilot. And that was free, no dongle needed.