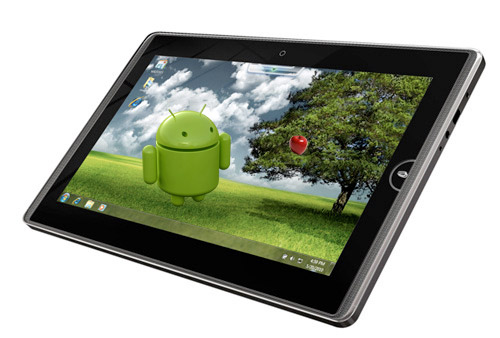 It’s clear that the Apple iPad is currently dominating the tablet market, but a number of new competitors will soon be entering that realm. I think one of the major keys to success is a properly designed mobile OS, so it’s good to see that Asus is making the switch from Windows to Android for its EeePad. When the Taiwanese company initially unveiled the Asus EeePad EP101TC at Computex, it was shown off running on Windows EC7. This offered a familiar experience for PC users, to be sure, but it’s probably too much heavy lifting for a device of this kind. I guess the suits at Asus came to their senses.
Asus hasn’t updated the proposed launch window (early 2011), nor have they indicated exactly which version of Google Android they’re going to use, but I feel this is a move in the right direction. It’ll make for a snappier user experience with the same hardware under the hood. Remember that the webOS-powered HP PalmPad could be due for release in early 2011 too, offering another tablet option. That’ll certainly be better than the Windows-powered HP Slate, don’t you think?