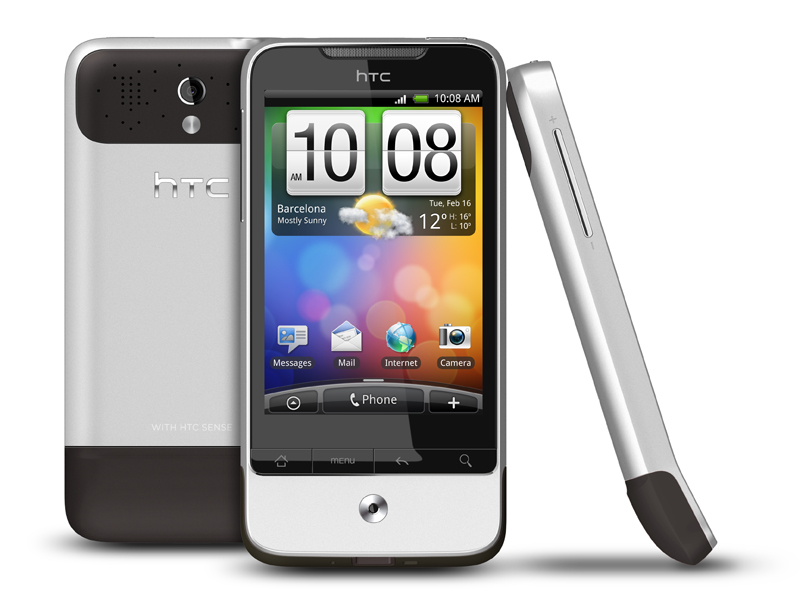 The Google Android platform gets me excited. In the USA the HTC Droid Incredible and Motorola Droid X take the throne, in Canada, we don’t have all the same high-end options, but we do get the exception from time to time. Expanding on the HTC Hero line comes the HTC Legend.

Features and Design
If you’re thinking that the overall form factor looks familiar, well, you’re right. The HTC Legend functions as a spiritual successor to the HTC Hero, throwing the “chin” back in the game. The Legend also comes with a bunch of other improvements too, including operating off the newer HSPA network.

You’ll also notice that the phone has been forged from an aluminum uni-body, making for a very sleek appearance overall. With one solid chunk of metal housing your Legend, there’s no traditional battery cover on the back; instead, there is a small removable plastic cover near the bottom which has a portion for the battery to slide in, as well as the SIM and the microSD slot. The trackball has been replaced with an optical trackpad as well, which is far better in respects to control, accuracy and life-expectancy, although many purists may not be able to live without a bit of tactile feedback.

The speaker is ill placed. A bit higher than what you would normally expect, usually it’s about halfway between the edge and the AMOLED, this time HTC put it right at the top making you have to shuffle the phone a bit lower on your ear to get the best sound.

It’s well-equipped with a blasting loud rear speakerphone, voice conferencing will also sound excellent. The ringer can also be muted by the G-sensor’s ability to detect you flipping the Legend on an incoming call.

Software
For starters, it’s running off of Android 2.1 with the HTC Sense UI. Pretty slick. A wide range of file formats are supported (AAC, AMR, OGG, M4A, MID, MP3, WAV and WMA). HTC also added an FM tuner with FM Radio app that can auto-scan for stations. Your headphones will double as the antenna to get FM signal, Bluetooth headsets are supported but we’re not sure how the quality will be.

Leap is great, it allows you to view seven different homescreens, by pinching and zooming or pressing the Home button from the main screen. This helps greatly with organizing your info and your apps, since the longer main menu can quickly become daunting if you have too many applications. The home screens make use of shortcuts, sure, but you can use widgets and other nifty things too.

Friend Stream is included, as an aggregator app and live widget, it keeps you in the know of all your Facebook friends and Twitter tweets. Similar to Motoblur’s Happenings app, the social apps are hardly being left out of new smartphone shipments these days.

Overall Performance
Even though the HTC Legend doesn’t boast one of those snazzy new 1GHz processors, the Qualcomm MSM7227 (600MHz) seems to be quite snappy in most applications, from gaming to mapping. Bootup time is fast and I experienced minimal lag during regular use. I did find that the browser took a little longer than expected to render pages at times, but this could be due to the network rather than the hardware.

Aside from the great operating system, which I’ll discuss in just a moment, the other major highlight is the brilliant 3.2-inch AMOLED capacitive touchscreen. This makes for some incredibly vibrant colors; it’s not quite Super AMOLED, but it’s a quantum leap ahead of most other mobile phone displays on the market today. From movies to pictures, web browsing to games, this screen is a joy.

Camera
With a 5-megapixel shooter on board, the HTC Legend should be adequate for email attachments and twitpics, so long as it’s a photo snapped during the day. Night shots and low-light scenes are noisy as would be expected with a camera phone. Video at 640×480 is choppy, but again, normal from a camera phone without image stabilization.

Bottom Line
If you’re thinking about getting a new smartphone and Bell Mobility has a few blips on your radar, the HTC Legend is worth some serious consideration. This is one of the best Google Android smartphones I have ever used, even if it has a slower processor.

The AMOLED display is positively fantastic and it’s great that HTC has adopted the more standard microUSB port for charging and syncing purposes. The aluminum unibody gives a great sense of this being a premium product and, while I’m not a huge fan of the optical trackpad, it’ll probably be more reliable and durable than the trackball in the long run.

The HTC Legend isn’t perfect, but it’s very, very slick and will just have to do for now. Find it with Bell Mobility for as low as $79.95 on a three-year contract and Virgin Mobile. No USA release or availability known yet.