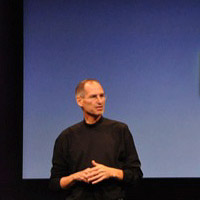 Apple today held a press conference detailing their plans on how to rectify issues with their latest smartphone release, as well as other tidbits of information that may be useful to some. With the “Grip of Death” on most iPhone 4 owners minds, Apple’s press conference today brought about news that they hope will settle the surrounding confusion regarding this non-existent problem.

Basically, if you buy an iPhone 4 before September 30th you will get a free case of some sort, since Apple can’t make enough bumpers in time they are giving you an option as a so called “fix”. If you already purchased one, they’ll refund you for it. If that’s not good enough and you’re ready for some Android action, just return the phone within 30 days for a full refund. What happens after September 30th you ask? Well, there could possibly be a new version, the iPhone 4S with a re-engineered design that won’t drop calls. But that’s just a dream right now.

The much sought after White iPhone 4 will be shipping this month. We already expected it by this time, but so long as Apple keeps telling us new ship dates we’ll keep believing them.

Another issue is the proximity sensor. It’s not been all that nice to people, turning on the speakerphone and disconnecting calls like a ghost in the technosphere. Well, Apple promised a fix for this in the next software update.

And of course sales.  Over 3.0 million units sold so far. That is amazing, but sales are slowing down from the 1.7 million units that were sold in the first hyped up weekend. This slowdown could be attributed to supply issues, rather than bad press.