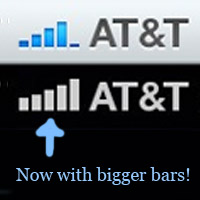 It’s not the full iOS 4.1 update we were expecting, but this quick little update promised by Apple aims to fix the signal bars on the iPhone 4.  Apple says this update “improves the formula to determine how many bars of signal strength to display.”  I’m not exactly sure how a formula on how the bars are displayed will change a damn thing about the grip of death issue, but this update isn’t really aimed at that, since it’s not even a problem right? The 579MB+ update will basically make the bars taller. Yay, thanks Apple!

The iPad update gets the following: