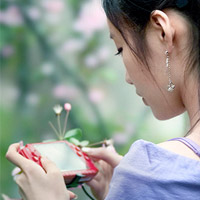 The next Sony PSP or Nintendo DS you buy may be fully equipped with 3G wireless capabilities, according to rumors surrounding Japan’s largest mobile phone company. Whispering fairies say NTT DoCoMo is negotiating with both Nintendo and Sony, makers of the DS and PSP  mobile gaming consoles, and that could only be for one very specific thing – to take mobile gaming to the next level of online multiplayer action.  Connected anywhere, anytime, by 3G.

DoCoMo’s top dog Ryuji Yamada was caught saying that “videogame makers know that in order for portable game machines to take the next step forward, they need wireless communication. We are discussing this with various players.”  Yamada has that right, these gaming devices are quickly being threatened with each iteration and jump forward smartphone technology takes.  App store inventories are growing with hot titles every day, even ports by the very game creators themselves are on the iPhone, if game console manufacturers want to keep playing in the mobile arena they’ll have to make a drastic evolution.  We know the 3DS specs were announced and 3G didn’t make the list, Nintendo may take an Applesque approach to their hardware in the future, offering a range of models with WiFi only, WiFi + 3G, and various storage capacity options.  Nintendo’s President Satoru Iwata was impressed by 3G being offered up for free on the Amazon Kindle.

“The distinction between gaming devices and mobile communication devices, like smartphones, are blurring. And it may eventually disappear” added Yamada.  Could that be hinting at much more than 3G connected gaming consoles, but consoles that are also our next mobile phones?