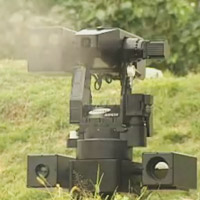 Anyone planning on illegally crossing the North/South Korean border better think twice, the government has deployed a couple sentry robots that can sense heat and motion and deploy 40mm grenades at the target, or just fire off a couple thousand rounds of ammunition its way. Audio and video is sent back to the command center allowing them to make the call on whether or not the response requires such offensive action.  Check the video below for a peak at the command UI.

These robots rang in at 400 million won ($330,000 USD) per unit, allowing South Korea to maintain the stronghold in their largely outnumbered military force of 655,000 troops, compared to 1.2 million of the North.  It hasn’t been revealed whether or not these are the Samsung SGR-A1 killing machines that were developed four years earlier, but my suspicions lead me to believe it is so.  Thanks Samsung, it’s nice to know you are keeping us connected socially, while simultaneously milling down North Koreans.  Will you be implementing twitter updates each time a sentry robot makes a kill?

South Korea also plans to develop additional robots which will be armed with weapons and sensors, these robots will be a complement to human soldiers on battlefields.