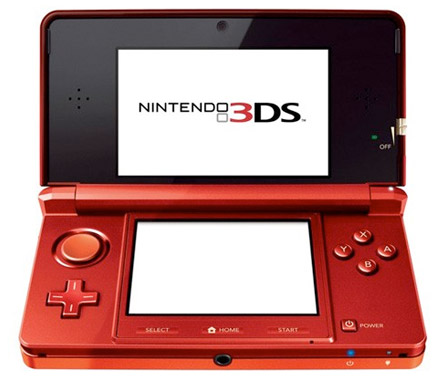 Whenever a company reveals a product ahead of launch date, they tell you that this may not be the final design. Such is the case with the Nintendo 3DS, but it seems that the Japanese game maker is unlikely to significantly alter the design of the 3DS before its release.  As you may recall, the Nintendo 3DS made its official debut to the world at E3 in Los Angeles last month. It comes with a new analog joystick, a slightly modified take on the DS design, a couple of extra cameras, and the 3D top display.

Platform producer Hideo Konna says that the handheld gamer is in its “final shape,” but Reggie Fils-Aime is quick to say that the final design isn’t quite there. This leads us to believe that some minor changes may be in the works, but there shouldn’t be anything major.  What if we want a bigger screen? They’re not denying the possibility of a Nintendo 3DS XL, but they’re not exactly confirming it either.

WIRELESS
2.4ghz / 802.11 wi-fi / Can communicate with other consoles or internet when in sleep mode / wireless can be switched off to preserve battery life

PARENTAL CONTROLS
The 3DS will include parental controls