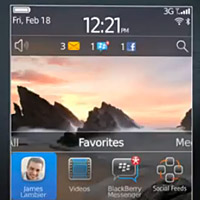 The launch of RIM BlackBerry 6-powered devices still remains unseen, some rumors and leaks have surfaced, but for the most part nothing official has been laid out for OS 6, until today. In an official YouTube plug by the company, a clip shows off what RIM plans to deliver in BlackBerry OS 6; social networking feed integration via the Social Feeds App, fluid visual interface, universal search, and the much anticipated WebKit-based BlackBerry browser stemming from their Torch Mobile acquisition last year.